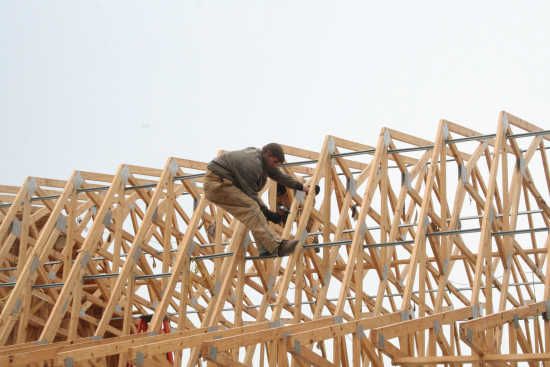 Banner Graphic/JARED JERNAGAN Jacob Spears of Hardhats and Hammers Construction works on disassembling the trestles of the old Dairi-Licious store in Greencastle. The building is being salvaged by the company to be used in the new Dairi-Licious building to be built in Crawfordsville this fall.
Order this photo

A failed business experiment on the south side of Greencastle will soon be recycled for the original business that spawned it five years ago.

The Dairi-Licious building at 1215 S. Bloomington St. is currently being salvaged by Hardhats and Hammers Construction. The material will be reused when the original Dairi-Licious in Crawfordsville is rebuilt this fall.

The Greencastle franchise opened for business in June 2006. It remained open through the fall of 2006 and then reopened for the 2007 summer season.

In the spring of 2008, however, the building went up for sale, and the shop has not reopened since.

Hardhats and Hammers owner Brian Chism said the Greencastle store was a pilot franchise for Dairi-Licious.

"If this one would've gone over, we might have been building these all over mid-America," Chism said.

However, franchisers Jim and Billie Crane were unable to make a go of it.

Dairi-Licious opened in Crawfordsville in 1963. Owners Frank and DeeDee Rose will have the original building torn down in November after closing for the year. Whatever can be salvaged from the Greencastle building will go into the new Crawfordsville structure.

The land the former Greencastle store resides on has been purchased by Casey's General Stores, which has plans to open a gas station and convenience store. A call to the corporation's offices was not immediately returned Friday. 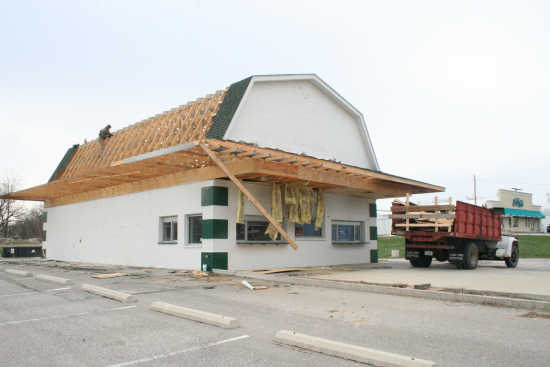 Banner Graphic/ JARED JERNAGAN The outside of the Greencastle Dairi-Licious, as the building is being torn apart. The construction pieces will be used to make a new Dairi-Licious in Crawfordsville this fall.
Order this photo

Other Casey's locations in Putnam County include Cloverdale and Roachdale. Also nearby are two stores in Brazil and one each in Rockville, Danville and Gosport.