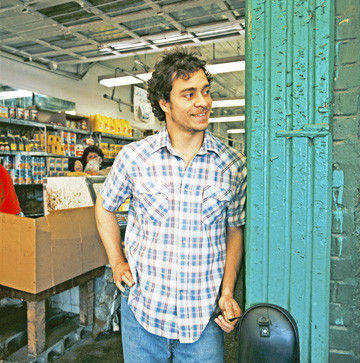 Amos Lee brought his soulful sound to the Murat Egyptian Room Sunday, along with The Secret Sisters.

His vocals are soulful, but controlled. He calmly strums his acoustic guitar. He tells stories between songs, but they are always in the same measured tenor as his songs.

This doesn't prevent him from reaching his audience.

On Sunday evening, Lee brought his act to the Murat Egyptian Room and didn't disappoint. Through a moving set of originals and covers, Lee showed why his popularity has been steadily increasing since his self-titled debut album in 2005.

Released Jan. 25, Lee's most recent effort, "Mission Bell," topped the Billboard 200 chart on the week of Feb. 12. As such, he leaned heavily on the album, performing eight of its 12 songs.

Favorites among these included current radio hit "Windows Are Rolled Down," along with "El Camino" and "Jesus."

Through Lee's stories about two of the new songs, the audience also got a glimpse of the kind of man they were watching perform.

As he introduced "Out of the Cold," he told of a visit to a military hospital and how insignificant the sacrifices of the soldiers made him feel. The experienced moved him enough to write the song, an account of the toll service can take on soldiers and their families.

Next came "Stay With Me," which Lee wrote to honor a sick man he had visited and performed for in Ohio. The dedication of the young man's fiancée moved Lee to write the song.

While the point of the stories was simply to introduce the songs and how fans can move a songwriter, it also revealed a performer willing to go the extra mile and able to open up and be moved by the people he gets to meet.

Far from simply a vehicle for the new album, though, Lee's performance gave his audience what it wanted, mixing in favorites from all his albums, such as "Supply and Demand," "Street Corner Preacher," "Keep it Loose, Keep it Tight" and "Arms of a Woman."

Adding nicely to the mix were covers such as John Prine's "Sabu's Visit to the Twin Cities" and Neil Young's "Are You Ready for the Country," which concluded the evening.

The most notable aspect of the show didn't come in any particular song, though. It's the ability of Lee and his band to meld so many disparate elements of music. This isn't simply in the dynamic of happy song/sad song or fast song/slow song, but in genre.

Lee's emotive voice brings to life the soul of his native Philadelphia. His band backs it up with elements of folk, country, gospel, rock, blues and just a touch of bluegrass.

In this mix, the listener gets something not defined by genre, but simply music -- good music.

The Secret Sisters introduce themselves to Indy

Much less celebrated than the "brotherly harmonies" of groups like the Everly Brothers and the Louvin Brothers are the beautiful, haunting music two harmonizing sisters can bring to music.

The Secret Sisters, Laura and Lydia Rogers, brought this kind of impact to the Egyptian Room when they opened for Amos Lee on Sunday.

As they mixed classics like "Why Baby Why" and "Your Cheatin' Heart" with their originals like "Tennessee Me" and "Do You Love an Apple?" the sisters from Muscle Shoals, Ala., filled the concert hall with just two voices and a guitar.

While the sisters' hometown has long been known for the R&B of the Muscle Shoals Rhythm Section as well as the country rock of current and former Drive-By Truckers Patterson Hood and Jason Isbell, it is the deep South -- these girls know real country music.

Package that with two beautiful sisters with great voices and deep blue eyes, and you have a winner. Look for these girls when they make a return trip to Indiana.