'Tangled' is a worthy addition to Disney library 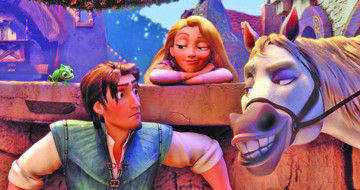 "Tangled" is Walt Disney Animation Studio's 50th feature and is a worthy addition to the stable of princess features the studio has produced. Mandy Moore and Zachary Levi voice the title character and Flynn Rider, respectively.

Disney Animation Studio's "Tangled" is a loser. A loser in the sense that another Disney release "Toy Story 3" won the Oscar for Best Animated Feature this year and the fact it wasn't even nominated, with "How to Train Your Dragon" and "The Illusionist" taking up spots.

But I'm going to tell you a secret. Come close....closer.... "Tangled" was the best animated feature released last year hands down. No offense to Woody or Buzz, but this was one of the best times I've had watching an animated film in a long, long time.

What Disney does so well is take tales we know, put a new spin on them and give us something fresh and delightful. "Tangled" has that sense of freshness with clever, witty dialogue, wonderful action and great songs.

"Tangled" is a retelling of the story of "Rapunzel", but Disney takes the critical elements of the original and builds a new story for a new generation. The result is one of the best princess movies produced in recent years and stands alongside the classics such as "Snow White" and "Cinderella".

As the pregnant queen becomes sick, a search in mounted to find a healing flower, which can cure her highness. However, Gothel (Donna Murphy) has been using the flowers magical abilities for centuries to stay young and beautiful. They give the flower to the queen, she's healed and her beautiful daughter, Rapunzel (Mandy Moore), is born with hair that retained the flowers magic.

Gothel jumps into action and steals the baby and locks her away in a hidden tower in the forest to keep using the power of her hair to keep her young.

Rapunzel, now 18 years old, is still locked away in her tower with her pal Pascal, a small chameleon, and every year she notices a celestial anomaly -- a stream of moving stars on her birthday. Her captive Mother Gothel (Donna Murphy) explains them away as ordinary stars and leaves it at that.

But when the handsome thief Flynn Rider (Zachary Levi) climbs her tower to escape the royal guard after stealing a tiara, he's apprehended by an 18-year old princess who's never stepped foot in the real world. What are the odds?

As they talk, he informs Rapunzel the lights are floating lanterns the king and queen release each year on the lost princesses birthday. Quickly she enlists him to take her to see the lanterns or he'll never see his prized tiara again. Reluctantly he agrees and the pair sets off for the kingdom unbeknownst to Gothel.

Now I could let you know what happens the rest of the movie, but what's the fun in that? I will tell you, however, you'll meet the kingdom's best enforcer, a white horse named Maximus, some lovable outlaws and have some Disney-worthy sing-a-long tunes -- and of course a happily ever after thrown in for good measure.

"Tangled" utilizes the talents of Moore and Levi brilliantly. Their charm and chemistry leap off the screen and give us another Disney film that will be treasured for years to come.

The Blu-ray/DVD Combo pack features a nice featurette "Untangled: The Making of a Fairytale" and two alternate openings featuring storyboard art. There's also seven minutes of extended songs. Plus, you get the usual suspects such as deleted scenes and trailers.

In addition to the movie, I would highly recommend snatching up the soundtrack as well. I have two little girls and I think I might know the songs better than they do.

Final Cut: "Tangled" is the 50th animated feature from Disney Animation Studios and it's no coincidence the traditional gift to celebrate 50 years is gold. The film is worth its weight in gold and will be long remembered as one of the finest princess films Disney has produced.