Internet on the brain 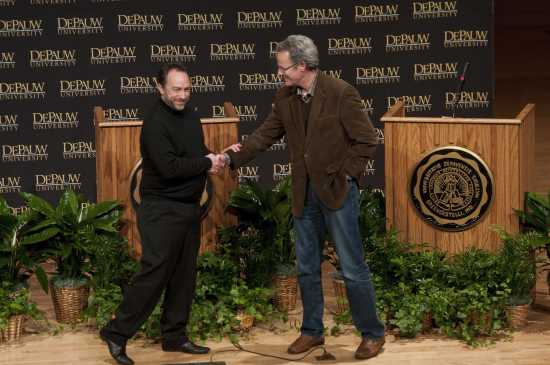 Jimmy Wales, left, shakes hands with Nicholas Carr, author of "The Shallows" at the Ubben Debate at DePauw University's Kresge Theater Wednesday night. The two discussed the role of technology in the world today and how it is changing how we think.

Anyone coming into Wednesday night's debate between Jimmy Wales and Nicholas Carr looking for a rousing debate about the benefits vs. dangers of the Internet probably left DePauw's Kresge Auditorium disappointed.

Only the second debate in the history of the university's Ubben lecture series, the event yielded far less rancor than the September 2009 debate between Karl Rove and Howard Dean.

Instead Wales, the founder of Wikipedia, and Carr, author of "The Shallows: What the Internet is Doing to Our Brains," largely agreed on how the Internet has changed society.

The disagreement came in whether these changes are positive or negative.

Carr's position, both in his book and the debate, is computers -- and the Internet in particular -- are limiting our ability to think deeply. Instead, we live in a state of distraction, jumping from one subject to the next, gathering information but not usually thinking deeply about it.

"I think the evolution of technology has taken a different turn in the last 10 years," Carr said. "The computer is no longer a tool we go to for particular tasks. The computer and Internet have come to almost always surround us.

Wales said he basically agreed with Carr's position. The difference is in his value judgment on these changes.

"We differ primarily in his pessimism about that," Wales said.

He continued that it's an idealized view of the world to think there was ever a time the masses were sitting and reading long books and thinking deeply about important topics.

He said while the knowledge the Internet grants us is often shallow, as Carr asserts, this may not be a bad thing. At least the Web gives users access to the information. Shallow knowledge is better than no knowledge at all.

"The piece of information I need right now is a valid human need," Wales said. "Getting it to me quickly is not a bad objective."

What made the night genuinely more of a discussion than a debate was that both men seemed genuinely interested in assuring the quality of content people are absorbing.

Far from being diametrically opposed, both put forth opinions from their slightly different points of view. When they found themselves agreeing too much, Carr would say something like, "Since I'm the pessimist..." Likewise, Wales might open a comment with "As the optimist..."

In discussing the continued viability of the news media, they agreed the future is uncertain, but that there will always be a place for professional, balanced coverage of the events of the world.

The problem is finding the economic model that supports professional journalists when so much content on the Web is free.

"My belief is that eventually we'll hit a sustainable point," Carr said. "The problem is that we don't know yet how far we're going to shrink. If we shrink too far, quality journalism will become something only the elite get."

Wales expressed similar thoughts, but said he is concerned about the coverage of small communities and regular people.

"Who's covering what's going on in a small town?" Wales asked. "A lot of small towns have lost journalists. It's a problem I don't have a solution for."

Even about Wikipedia -- Wales' invention -- the two men took a similar view. It's a valuable tool, but not a scholarly source.

"Our goal is not to be cited," Wales said when asked about the site's role for college students. "What an encyclopedia should do for you is give you broad background information and guide you elsewhere."

The ultimate disagreement of the evening, and a very cordial disagreement it was, is the direction the Internet has culture and thought heading.

Carr maintained the Internet provides no outlets for deep thought, instead giving us distraction. He expressed worry about the impact on both our personalities and on culture.

"The Net is providing us no opportunity to behave in an attentive way," Carr said. "I think it's time we take a more balanced and more critical view of the costs."

Wales continues to view the Internet as a tool, a young tool whose capabilities we are still uncovering. He pointed out that technology actually has him reading more books, one of Carr's measures of deeper, sustained thought.

"I'm reading about twice as many books as I was this time last year. That's because I have an iPad with a Kindle," Wales said.

Although Wales was dubbed the night's optimist, both men seemed concerned with the question of where we go from here.

"The real question is, 'How do we move forward?'" Wales asked. "I don't think it's time to give up all hope."