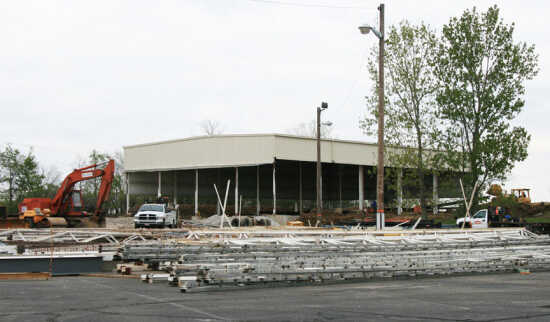 A crew from Dillabaugh Inc. building movers, Crown Point, continues site work at the northeast corner of the old Mallory Capacitor Corp. property at 1701 Indianapolis Rd., Greencastle. The high-bay storage facility portion of the old Mallory plant, last inhabited by the Dixie Chopper production and assembly units in April 2009, was moved to the corner of the 13-acre site early Tuesday by the Dillabaugh crew.

First the demolition and now the big move.

A metamorphosis of the old Mallory Capacitor Corp. property on Greencastle's east side continued this week.

Dillabaugh Inc., a building moving company from Crown Point, raised up the high-bay storage portion of the old plant, put it up on wheels and rolled it over to its new location in the northeast corner property at 1701 Indianapolis Rd.

Wednesday afternoon, site work was continuing in and around the building at its new location near the head end of the Greencastle-Fillmore People Pathways trail.

Late last month, Jerry Lewis Construction and Excavating, Greencastle, took down the 93,000-square-foot former Mallory structure that had stood since 1952.

"The guys worked hard on the Mallory project," Lewis said, calling it "a good, safe demolition."

Mark Lewis did most of the major demolition work on the main structure, along with Chris Torr. Meanwhile, Wayne Tate did much of the clean-up work.

"It all went pretty much on schedule," Lewis said, noting that the trash has been hauled off and recyclables separated for reuse.

"There's nothing left on site that wasn't accounted for," he added.

Tentative plans call for a warehouse building to go up on the industrial site, which includes access via a stoplight at Indianapolis Road and the eastern terminus of Veterans Memorial Highway.

All the concrete block recovered from the original building was crushed for reuse as a base once new construction commences. That won't likely occur, however, until sometime in late 2012.

In the meantime, Vishay, the last parent company of Mallory, will be responsible for environmental clean-up work at the site.

John Zeiner, who co-owns the property along with son David and Brenda Pershing, said a clean-up plan has been approved by Indiana Department of Environmental Management and should begin "sometime in May."

The previous owners will have until the summer of 2012 to undertake the remediation effort and haul off the soil to a hazardous materials landfill, all while continuing to monitor the groundwater.