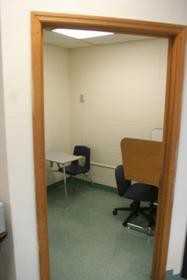 The "time-out room" from Amber Russell's classroom, above, along with some recent Facebook posts, is at the center of a controversy over which the North Putnam Middle School teacher resigned Tuesday.

BAINBRIDGE -- A North Putnam Middle School special education teacher criticized for comments she made on Facebook and involved in an August 2010 incident in which she allegedly shut a child in a "closet" turned in a letter of resignation Tuesday, effective immediately.

Amber Russell was brought to media attention based on comments she made on her Facebook wall, such as "I love dumb people. I call it job security" and "5+1=Freedom from the Hell hole." After this incident, Leigh Casto and disability advocate Jill Summerlot met with middle school principal Terry Tippin regarding an August 2010 incident in which Russell had reportedly placed Casto's son Nathan, who is autistic, in what was allegedly being used as a storage closet at the time.

In a press release from school corporation superintendent Mary Sugg Lovejoy,which was first given to the Banner Graphic, she said, "I was shocked and deeply saddened by the Facebook postings brought to my attention by a parent. This has been a very hurtful situation for parents and a very difficult situation for North Putnam Schools.

"The actions of a few have cast a shroud of negativity on the many dedicated and exemplary teachers at North Putnam who care deeply about their students. I apologize to the parents and children who have been hurt by the Facebook comments. We will work hard to restore the trust and confidence of our parents and community."

Lovejoy said in the release that Russell met with the teachers association and the corporation's administration and counsel before turning in her resignation letter. Lovejoy admitted in the release that the situation should have been handled differently and seclusion actions such as what Nathan went through were not part of his individualized education program, or IEP.

"I began my teaching career as a special education teacher. I have taught learning disabled, cognitively disabled and emotionally disabled children. I learned a great deal from my students; far more than they learned from me. A child should never be placed in seclusion, unless the action is discussed and agreed upon by the Case Conference Committee and written into the student's I.E.P. The child's parent(s) should be notified when a child is placed in seclusion. These steps were not taken, and they should have been," Lovejoy said in the release.

Leigh Casto said she is glad to hear action was taken in this incident, but she still wishes to talk to the board to clear up a few concerns and ask a few more questions.

"I'm glad that she is acknowledging that there was a problem ... that the situation wasn't handled correctly," Casto said.

Summerlot said she will follow up on whatever else Casto would like and she hopes the healing can begin.

"I would think that this would be closed," Summerlot said of Russell's resignation. "That should settle it."