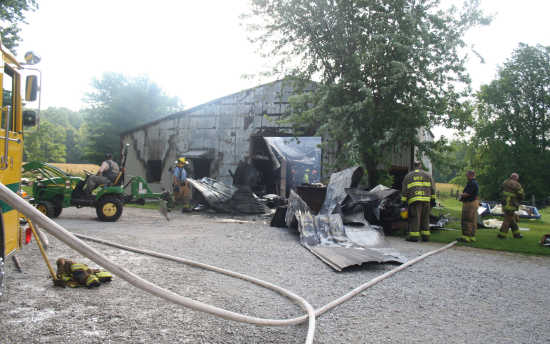 Fire destroyed this building that housed part of Jim Wiegand's gunsmith business in Warren Township on Tuesday morning. Personnel from 13 fire departments responded to the two-alarm blaze.
Order this photo

At 5:47 a.m., the Cloverdale Township Volunteer Fire Department was dispatched to a structure fire at 6821 South CR 250 East, a gunsmith shop owned by Jim Wiegand. It was quickly apparent they would need backup.

All told, 13 fire departments from three counties responded to the blaze, battling it from approximately 6 a.m. until around noon. Cloverdale returned along with the state fire marshal's office after 1 p.m. to battle a hot spot that flared up.

CTVFD chief Kerry Shepherd reported "heavy fire throughout the building" when his department arrived. They briefly tried to fight the blaze from inside the building, but backed the crews off as the fire spread.

He said factors such as the nature of the building and its contents complicated fighting the fire.

"It was a finished pole barn with several rooms on the second level, and that's what made it so hard to fight," Shepherd said.

Additionally, the nature of the business meant there was some ammunition in the building, causing concern about explosions. Shepherd said while there were a number of small explosions, there were none he would consider major explosions.

"It had potential to be a lot worse than what it was as far as the (safety of) firefighters go," Shepherd said.

The fire marshal's investigation revealed nothing suspicious about the fire.

"Everything is pointing toward the air conditioner, but we're going to let the insurance company get in there and check it out," Shepherd said.

Crews were able to save quite a few guns and other equipment.