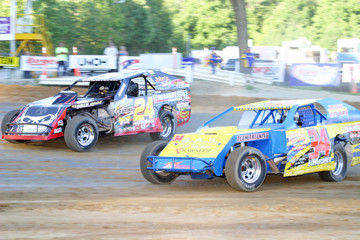 Babb made his pass stick and was able to hold off Unzicker and Jason Feger over the remaining 26 laps to pick up a second $5,000 payday after winning at Lake Odessa, Mich. on Sunday evening at I-96 Speedway. Babb defeated Jeep VanWormer by holding him off the final three laps two nights earlier. After a night off from the hectic Hell Tour, Babb was back in the saddle at the Putnamville oval.

Group qualifying went to Babb, who topped overall qualifying with a time of 13.187 to edge Feger in group one. The second group was led by Frank Heckenast Jr. in 13.485 and Don O'Neal was quickest in the third group, but his night ended prematurely when he rolled several times during his second qualifying lap of the night.

Heckenast Jr. and Feger picked up heat race wins to set the feature for the night.

Harrison, the defending DIRTcar UMP Modified National Champion picked up a win in the second heat race and went on to win over Ryan Thomas of Gosport, Ind. and Clint DeMoss of Bloomington, Ind.

The win is Harrison's third in as many starts during the Summitt Modified Nationals. John DeMoss placed fourth and closed to within five points of Forest, Ill. driver, Jeff Curl, who leads the series in points heading into last night's race at Belle-Clair Speedway in Illinois. Gabe Menser wrapped the top-five on Tuesday.

In the open rules bomber class on Tuesday night, 28 cars were on hand for the festivities, but no one could catch up to Lee Hobbs, who won his second feature at LPS this season.

Hobbs earned a win in the second heat race as Jason Cox won the first and Blake Cross was the third heat race victor.

Cox and Hobbs started on the front row ahead of Cross and John Grenier Jr., but Cox night went sideways as he spun on the first lap on a slick racing surface. He wasn't alone as several cautions flew before the first feature lap was completed.

Once the feature went fully green however, Hobbs secured the advantage and built his lead ahead of Grenier, who led a two-way dual between Joel Shores and Jordan Almanza with Cross in two.

Hobbs continued to build on his lead over the course of the feature as Almanza and Grenier settled into a fight for the runner-up spot. Harry Shephered moved into contention, dueling with Shores with David Bumgardner chasing fifth position.

Hobbs would go on to take the checkered flag as Almanza took second ahead of Daniel Foxworthy, Shores and Shepherd in the top-five.

Action resumes on Saturday with sprints, modifieds, super stocks and bombers on tap along with the annual fireworks extravaganza. General admission is $15, kids 10-and-under are free. Main gates open at 4:30 p.m. with hot laps at 6 p.m.