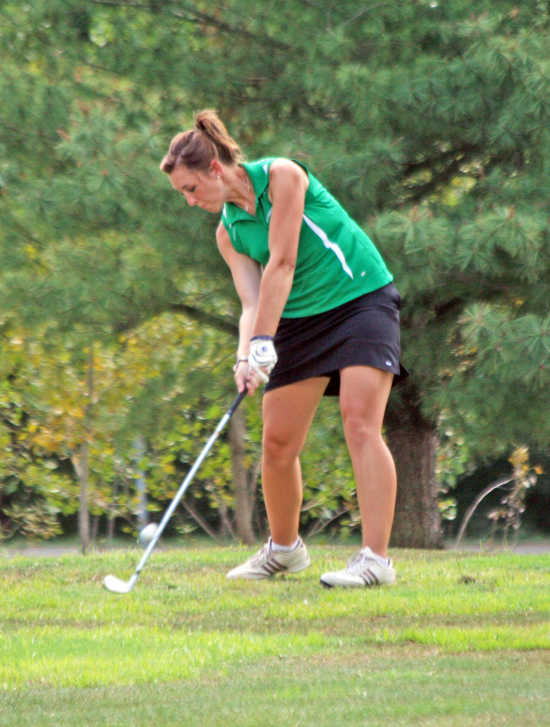 Cloverdale's Sydney Shrum hits her drive on No. 18 Thursday at the Cloverdale Invite. Shrum placed second overall with a score of 81.

CLOVERDALE -- With a much-welcomed breeze blowing across Clover Meadows, seven teams competed in the Cloverdale Invitational Thursday. Monrovia's Chrislyn Church won medalist honors with a score of 78, while Cloverdale's Sydney Shrum in second with a score of 81.

Cascade won as a team with a score of 389, with Monrovia finishing second with 403. While the competition was strong, the mood was lighthearted with players conversing and laughing as they played their rounds.

The host Clovers finished third with a score of 426 and first-year head coach Matt Langdon said following the round he's optimistic about what the future holds for the Clovers.

"We improved," Langdon said. "Sydney's (Shrum) posted two really good scores. She won the South Putnam Invitational with an 82. It's just a lot of summer work paying off. She played in the Pepsi Tour, so that's really paying off. (Victoria) Boyette has posted two really solid scores. I think she'll be a solid senior for us this year."

Particularly impressive is the play of Makayla Moore. Landgon said from last year's season opening tournament to this year's, Moore shaved 40 strokes off her score and whittled it down another 20 strokes since Tuesday's match at South Putnam.

"Moore just keeps scoring points lower and lower. She just keeps coming down. We had a young girl, (Anna) Spencer -- her first time out and shot well for her. We'll get a couple more coming in next week, so hopefully the team gets growing and continuing to keep getting better," Langdon said.

The South Putnam golf squad was sixth on the day with a score of 440. Head coach Brian McClure said he thought his girls played well on the day.

"(It was) pretty good," McClure said. "We had four out of five girls improve from our last tournament, so we're excited about that. The girls are all playing hard and trying hard and that's we can ask -- especially with how hot it is out here. They're all trying their best. Very good attitudes and we're just excited about the young season."

Caitlyn Boyce led South Putnam with a 99, followed by Kendra Boyce with a 106 and Madison Cash with a 111. Sarah Woodworth shot a 124 for the Eagles with Jesse McKean carding a 130.

Langdon talked about how his team is setting its goals a little loftier this season. He knows they have some work to do, but said he wants to build a team atmosphere and that should go a long way in the team achieving some success.

"I think it's looking up for us, you know," he said of the 2011 season. "County could be wide open and those types of things. We want, in the past, we've not really had enough girls, to really think about team. We're starting to get back to where we're thinking about team and I think that helps individuals too. They might be out there and having a tough day, but they think 'I'm not going to give up because my team's counting on me' so that helps.

"I think we're going to start setting some team goals. Golf's an individual sport too, so we're looking for those championships too, but hopefully in the future start winning some matches and some counties and conferences," Langdon said.