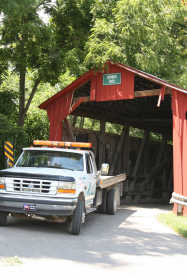 While it remains open for traffic, Dunbar Covered Bridge sustained $5,000-$10,000 worth of damage in a Thursday morning accident. Schuyler Jackson, Marietta, Ga., drove a semi tractor-trailer through the historic covered bridge, damaging both ends.

GPS-dependent drivers, beware. That little monitor on the console may lead you astray.

A Thursday morning GPS mishap led a Georgia semi driver onto hilly Putnam County roads and left a local landmark with between $5,000 and $10,000 in damages.

Although his path through the country was unclear, Schuyler Jackson, Marietta, Ga., approached Dunbar Covered Bridge from the north on County Road 175 West. His 2008 Balboa tractor-trailer clipped the north end of the bridge, but did the most major damage as he made it through to the southern end.

Lt. Danny Wallace of the Putnam County Sheriff's Department said the problem was worse at the southern end because of the road's steep dropoff as it rounds the corner into County Road 25 South.

As the tractor and front of the trailer followed the road grade downward, the rear end raised up, taking out a number of the boards over the southern entrance.

Jackson continued to Walmart Distribution, his local destination. From there, he notified authorities of the incident.

The 131-year-old bridge looks to have escaped with only cosmetic -- not structural -- damage.

Jackson was driving for Minneapolis-based Stan Koch and Sons Trucking Inc. Smith said Koch's insurance company has already made contact with the highway department. They are getting three estimates for the work.

"That's a historic covered bridge," Smith said. "That insurance company would have had to come up with several hundred thousand dollars had it done major structural damage."