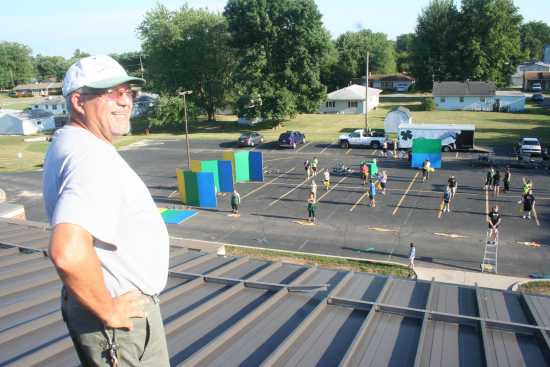 CLOVERDALE -- Clover-dale High School band director William Cole stands on the roof of the high school overlooking the rear parking lot with his arms folded across his chest. Below him is the Cloverdale Marching Band, which will perform at the Indiana State Fair today at 4:16 p.m. He gives them their starting cue.

The band begins its practice run behind multi-colored dressing screens and comes out wearing yellow, the theme for the first of the three songs they will perform. Behind another dressing screen, the instruments will be decorated with blue cloths, and behind another, the performers will change into green outfits. All while making spiral shapes on the field within a six-minute time limit.

"It's always stressful building up to it, but it's always fun to be part of," said senior Hannah Ramey, drum major and clarinet player in the band.

The expectations are high for the band because of its success at the fair last year. In 2010, the band won the "Esprit de Corps" award for a band of its size -- around 30 members -- and they performed again in the evening at the fair, where the performance was televised.

Cole said he hopes the band is able to repeat that performance.

"This is what we've been working toward all this time," Cole said.

The band isn't the only group working for that goal. Several volunteers helped set up the necessary props outside while the band practiced inside. Jenna Lewis, former Cloverdale Marching Band drum major and current Purdue University student, said she has enjoyed helping the band progress this year, especially those she helped teach in the beginners camp, a new part of the marching band experience this year.

"It's really exciting to have so many young ones," Lewis said.

The beginners camp was for first-time marching band members of all ages -- from junior high students to high school seniors -- meant to help performers get used to marching band. Because of the camp, the band has changed its student make-up considerably from when Lewis was part of the group. But the dedication to the group remains the same.

"We're still going to have one of the most dedicated groups we've ever had," Ramey said.

The band will be the 44th to perform out of the 45 total bands involved in the contest. But they will leave for the fair at 8 a.m. so the kids can experience the fair and enjoy it before the performance. But for now, Cole continues to drill the band's movements and arrangements to make sure they make the perfect spirals at the fair.