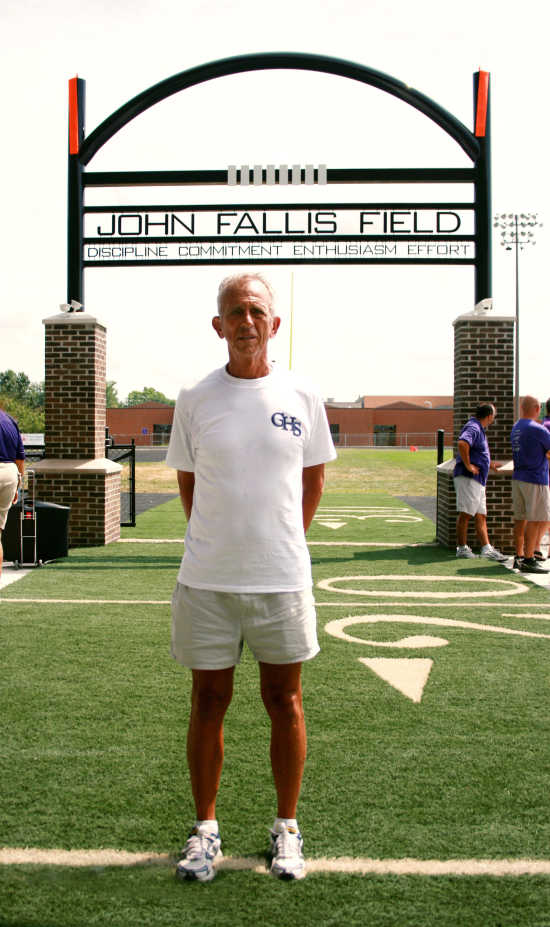 John Fallis stands in front of the newly dedicated John Fallis Field and the archway entrance to the playing surface at Robert L. Harbison Stadium at Greencastle High School.
Order this photo

Admitting he didn't really know what to say in response to the football field at Greencastle High School being dedicated in his honor Saturday, longtime GHS Coach John Fallis really didn't need to say much.

Everyone else said it all for him.

"This is beyond belief, I really don't know how to say my appreciations," Fallis said after former players heaped praise upon him, not just for what he meant to them as their coach but for the lessons in life his guidance offered them.

Members of the Organizing Committee for the naming and dedicating of John Fallis Field join their beloved coach in front of the archway leading to the field after Saturday's ceremony. They are (from left) Jack Bedwell, Shawn Gobert, John Hecko, Russ Hesler, Coach Fallis, Jamie Robinson, Kelly Lewis, Bill Shuee and Robert Sedlack.
Order this photo

First to address the crowd of several hundred gathered in front of the archway leading to John Fallis Field was Robert Sedlack, a member of the Class of 1985 and the Organizing Committee for the Fallis Field project.

Standing in front of the archway that proudly displays Fallis' four cherished ideals of Discipline, Commitment, Enthusiasm and Effort, Sedlack noted how the coach's "influence went well beyond football" and his principles transcend sports and life.

Sedlack eagerly related the story of Mike Catanese, valedictorian of that 1985 class, who went on to get a PhD in astrophysics from the University of Michigan.

Catanese wrestled and ran cross country and track, but never played football for Fallis and GHS.

"Coach Fallis was the best teacher I ever had at GHS," offered Catanese, who had him in the classroom for college algebra and calculus.

"What I loved about being in Coach Fallis' class," Catanese continued in recent remarks to Sedlack, "was that he approached it the same way he did training for football or anything else he was in charge of leading high school students through.

"He expected us to give it all we had, and he gave us work that challenged us to reach beyond what we thought we could do."

One time Catanese was the only person in the class to finish a particular homework assignment. Fallis took note and made a point to tell the rest of the class.

"He told the entire class, 'Mike isn't smarter than you, he just doesn't quit until he gets the answer.'"

Catanese quickly realized Fallis was trying to motivate the others while keeping him from getting a little too cocky.

"As far as I remember," Catanase concluded, "every person in that class finished every single assignment for the rest of the year after that."

That was typical of how Fallis motivated students and players alike, Sedlack noted.

John Hecko, who quarterbacked the 1985 unbeaten GHS team coached by Fallis, thanked the Fallis children (Trevor, Rick, Rebecca and Rhonda) and his wife Pat for sharing their father and husband with Tiger Cub players over the years.

The archway, Hecko said, is meant to be more than a monument to Fallis. It needs to become part of the GHS football tradition, he said, and stand as a reminder to each new crop of players of the "blood, sweat and tears laid down by those who came before them."

It should stand as a tribute, Hecko suggested, that "success is not always based on winning and losing but on how you played the game."

Hecko concluded by relating what Coach Fallis has meant to him over the 28 years he has known him as a player, assistant coach and friend.

"The first word that came to mind," Hecko said, "was integrity. Who you see today is who you will see tomorrow, not only the field but off it as well.

"Thank you, John, for your leadership, your friendship, your integrity and your time," he concluded.

GHS Assistant Principal Russ Hesler opened his remarks with: "Welcome to John Fallis Field," which prompted a round of applause among the purple-and-gray faithful.

Hesler then recounted how fundraising efforts for the archway project began, and how Fallis himself was the second person to donate.

He then turned and handed Fallis back his check.

Hesler told the gathering he has learned a lot from Fallis as an assistant coach, faculty member, friend and neighbor.

"And I'm still learning from John," Hesler said. "We all wouldn't be where we are today (without his influence)."

Fallis' overall GHS record was 121-81 with three undefeated regular seasons, 1985, 1991 and 1995. He won five conference championships at Greencastle and was inducted in the Indiana Football Hall of Fame in 2004. Overall his career coaching record was 195-141 with 33 years as a head coach and 10 as an assistant. He retired from coaching after leading Hagerstown High School for a second time last season.

"We should have done this a long time ago," Hesler said of the naming of Fallis Field, "but John wouldn't quit coaching."

Fallis, graciously accepted the accolades and the adulation, giving it back in kind.

"It's the journey that is more important than the destination," he said, quoting a favorite saying.

"Being able to share in your lives," he told the group, "and spend years and years with hundreds of you means more to me than the naming of this field."

Fallis then donned a purple GHS No. 25 (for his years as coach) jersey and, for the first time, led the 2011Tiger Cubs onto the field that now bears his name.

As he left the field to greet waiting friends, family and fans, he was met by a mother of a freshman Tiger Cub who was a bit choked up by the proceedings.

"I never had you in class," she said. "In fact, I never even went to this school, but from what I heard here today, I wish you were teaching back when I was in school."