A Cloverdale man is facing murder and rape charges in Parke County after he led authorities on a chase through Putnam County Saturday morning.

Jeremy Musall, 27, is accused of killing 30-year-old Joseph Snow early Saturday morning in southeastern Parke County. He then allegedly traveled into Putnam County and dumped the body before eventually being apprehended near Cloverdale. 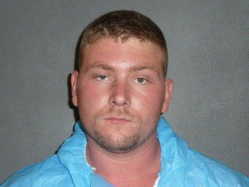 Parke County Chief Deputy Bill Todd said his department received a 911 call from a woman at 7:17 a.m. Saturday, reporting the crimes. The caller said Musall had broken into the home she and her daughter shared with Snow at around 1:30 a.m.

The caller said Musall had killed Snow and raped her. She said Musall had then taken Snow's body as well as her 20-month-old daughter. The alleged incidents took place at a home on Parke County Road 1100 East, near Rocky Fork Lake.

The woman was following Musall in her car as he entered Putnam County on West Walnut Street Road.

The call came in to the Putnam County Sheriff's Department that the murder had been reported and the suspect was en route to Creek Road in Madison Township to dump the body.

Putnam County Chief Deputy Doug Nally said officers located Musall's vehicle on Creek Road, and began to pursue it. However, the gravel road made the pursuit difficult, and the officers lost track of Musall somewhere along West Walnut. 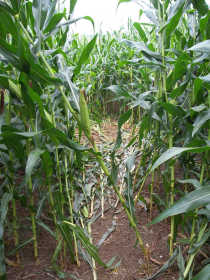 The Putnam County Sheriff's Department found the body of Joseph Snow in this location beside CR 500 West.

Information indicated Musall could be heading for his mother's residence in Cloverdale, where officers from the Sheriff's Department, Cloverdale Police and Indiana State Police were waiting for him. When he pulled into the driveway, Cloverdale Officer Charlie Hallam made initial contact with him before the other officers made their presence known.

He was taken into custody without incident, but the body was no longer in his vehicle.

Officials from Family Support Services and Child Protection Services were on the scene to help with the girl, who was unharmed.

With Musall in custody, the effort turned to finding Snow's body. Volunteers from the Madison Township Fire Department were called in to help with the search.

The search narrowed when the police got information the body was in a cornfield west of CR 500 West, which is north of West Walnut by way of CR 450 West.

The body was eventually located by Sheriff Steve Fenwick, and ISP crime scene technicians were called in to investigate the area.

"Once we narrowed our search down to the cornfield, that really helped," Nally said. "We had a lot of agencies involved and everybody stepped up and was very professional."

The body of Snow was the second dead body in less than a week to be discarded in an area west of Greencastle.

Last Monday, the body of Tyler Kirts, 25, Crawfordsville, was found on property behind Refuse Handling off West Columbia Street. No cause of death has yet been determined in that case. There is no reason to expect that the Snow and Kirts cases are related at this time.

Upon transport to the Parke County Jail, Musall was initially charged with murder, rape, criminal confinement and intimidation.

Musall, who resides and works in the Greencastle area, is a 2002 graduate of Mooresville High School.

His criminal record includes multiple run-ins with the law, including several battery charges. Musall received a six-year sentence as one of three assailants in a June 2008 beating of a 26-year-old Greencastle man. Musall was ordered to serve two years executed with a year of home detention and three years probation in that battery case.

Meanwhile, Snow's criminal record shows a January 2010 arrest for petition to revoke probation stemming from a previous charge of possession of marijuana and trafficking with an inmate.

Comments
View 26 comments
Note: The nature of the Internet makes it impractical for our staff to review every comment. Please note that those who post comments on this website may do so using a screen name, which may or may not reflect a website user's actual name. Readers should be careful not to assign comments to real people who may have names similar to screen names. Refrain from obscenity in your comments, and to keep discussions civil, don't say anything in a way your grandmother would be ashamed to read.