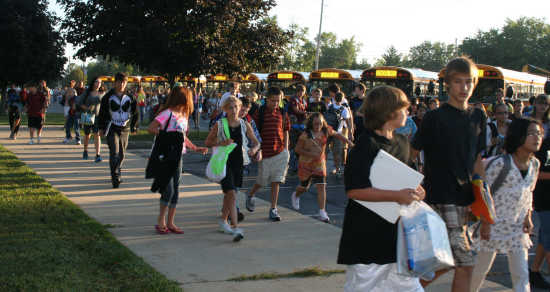 Dozens of students streaming from the buses to Greencastle Middle School was the closest Greencastle Community Schools came to a traffic jam on Tuesday. With construction continuing on the Percy Julian Drive, school officials had been dreading the possibility of long lines and delays Tuesday. The problems never materialized. "We asked that whoever could ride the bus would ride the bus," Superintendent Lori Richmond said. "They must have done that because we had nowhere near the cars I was told have been here in the past." The superintendent credited the administrators and staff of the two schools for developing plans and keeping things moving properly throughout the morning and afternoon sessions.
Comments
View 8 comments
Note: The nature of the Internet makes it impractical for our staff to review every comment. Please note that those who post comments on this website may do so using a screen name, which may or may not reflect a website user's actual name. Readers should be careful not to assign comments to real people who may have names similar to screen names. Refrain from obscenity in your comments, and to keep discussions civil, don't say anything in a way your grandmother would be ashamed to read.
Respond to this story