PUTNAMVILLE --- An Ohio truck driver was fatally injured Wednesday afternoon in an accident occurring within the one-lane construction zone of Interstate 70 near the Putnam-Clay county line.

Preliminary investigation revealed that eastbound traffic was moving slowly through the construction zone and had come to a stop for an unknown reason, Indiana State Police at Putnamville reported. 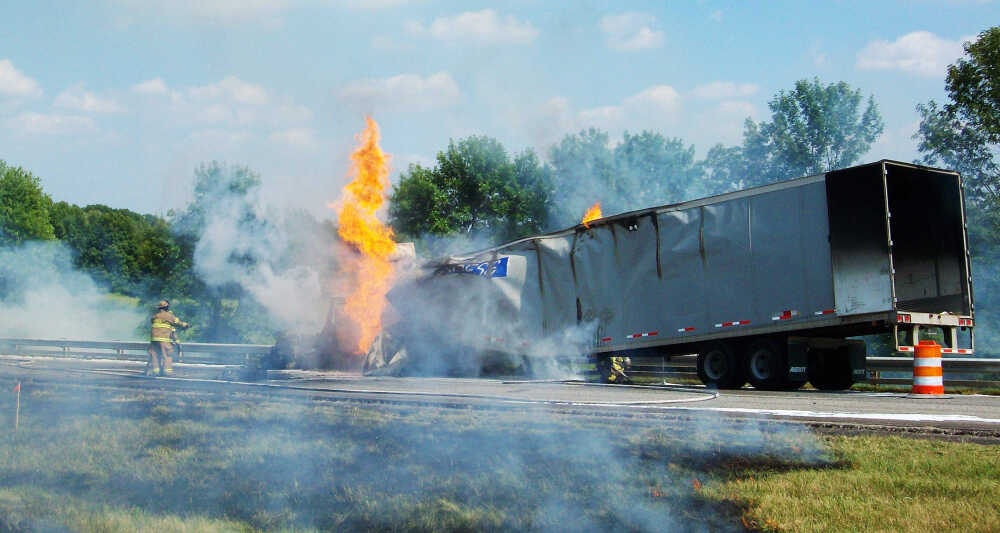 An eastbound 2005 Volvo tractor, pulling a box trailer and being driven by Kundan S. Randwaha, 57, Ontario, Canada, had stopped for traffic when it was rear-ended by a tractor-trailer driven by the Ohio man.

Randwaha, who was driving for Transforce Co. and en route from Vincennes to Ontario was uninjured.

The identity of the deceased driver will not be released until positive identification can be made, authorities said. That could take up to seven days, possibly longer. The deceased will be taken to Marion County for an autopsy.

Putnam County Coroner Thomas Miller was on the scene to assist Indiana State Police, who are conducting the crash investigation. A post-crash inspection of the tractor-trailers revealed no mechanical factors for the crash.

ISP Troopers Brandon Mullen and Ted Robertson came upon the accident scene at the 30-mile marker of eastbound I-70 (11 miles west of Cloverdale) at 3:16 p.m.

The troopers immediately ran to the second tractor-trailer and noticed the driver was pinned within the cab area of the semi.

The troopers began to assist the medical personnel from CARE Ambulance Service, who were passing by as well, when flames erupted within the cab area.

The flames and heat became so intense that it forced the troopers and bystanders to retreat. The uniform of Trooper Mullen even caught on fire and was quickly put out by bystanders.

The driver remained pinned in the vehicle and perished in the fire, State Police said

Interstate 70 was closed in both directions during the fire and its aftermath. Traffic was rerouted over U.S. 40 between State Road 59 and U.S. 231.

Westbound lanes reopened shortly after 5 p.m., while the left lane of eastbound I-70 reopened about 9:45 p.m. Wednesday.

One of the semis was loaded with cardboard and recycled paper. During the clean-up operation, part of the smoldering debris being hauled from the scene caught fire in a truck traveling along State Road 243. Fire units had to be sent to State Road 243 to extinguish that blaze.

Also assisting with cleanup efforts on the interstate was Curtis Wrecker.