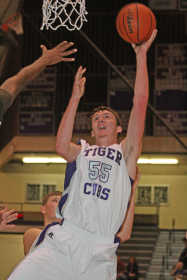 Greencastle's Nick Hutcheson, a 6'7" senior forward and two-time Putnam County Player of the Year, participated in the IBCA Top 100 invite for the second consecutive summer.

"It was an honor to be invited and the competition was excellent," Hutcheson said. "Coach (Bryan) Gerard told me to focus on being the best rebounder at both ends of the floor and display my athleticism. I feel I did that and it was a very successful day."

Hutcheson left an impression on many of the college coaches in attendance with his rebounding skills and ability to score both inside and out. In his second game of the day, against coach Gerard's team, he had 12 points and 14 rebounds. In addition, the last game of the evening saw Nick score eight straight points in the fourth quarter to lead his team to victory.

Hutcheson also played in the All-Star game for rising seniors in New Castle in June. In the exciting 3A game, he once again showed his rebounding skills on both ends of the floor. He also participated across the country with his AAU team.

Hutcheson averaged 21 points and 14 rebounds a game last season and is looking forward to his senior year.

"I am excited for my senior year," he said. "I love my teammates and believe we will be a fun team to watch."