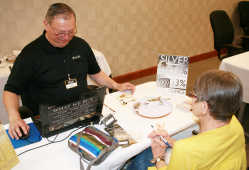 Ohio Valley Refinery appraiser David Ford checks the value of jewelry and other items brought in by a local woman Wednesday afternoon at the road show event at the Inn at DePauw. In addition to precious metals, local residents also claimed cash for coins, paper money and war memorabilia.

Greencastle area residents are sinking their teeth into the Gold Rush of 2011.

The Ohio Valley Refinery and Roadshow is visiting the Inn at DePauw this week (9 a.m.-6 p.m. daily through Friday), and local residents have been cashing in gold, silver, jewelry, war relics and other items.

So what's the weirdest thing show manager Jeramy Weese and appraiser David Ford have seen come in so far?

"Most people discard them," he conceded, "but we still buy them. At the end of the day, it's still gold and we can send them (the teeth) right to the refinery."

Beyond teeth and odder items, Weese says the road show is a continued success as it sends its 100 teams out across the U.S. and Canada because everyone has something to share or sell.

"The average person out there," he said, "has at least $400 worth of something tucked away somewhere, and it doesn't have to be gold or silver."

"People are putting more and more of their money into precious metals," Weese said, "which is an extremely smart thing to do the way the (stock) market is.

"The price of gold has just shot up the last couple of weeks and has stayed steady."

Some prognosticators have predicted gold may reach $2,500 an ounce before the rush is over.

But besides jewelry and precious metals, the Ohio Valley Refinery team, has seen a wealth of memorabilia, too.

"We had a couple of guys come in today who wanted to share some of their war memorabilia, Weese said. "A lot of those pieces can be purely sentimental, but occasionally you can find that diamond in the rough."

As he did on Wednesday. A local man brought in a small box of what Weese called "random stuff" -- buttons and trinkets mostly.

As the appraiser picked through it, he spotted something that looked like red, white and blue ribbon.

"It was a Civil War Sons of Veterans Medal," he said. "It's not extremely valuable but it is a really unique piece of American history.

"When you're holding something like that in your hand that's 140 years old and still has a red, white and blue ribbon attached, it gives you chills, you know."

Weese cautioned collectors that every piece that gets brought in has three separate values.

"There is it's sentimental value, and there's the book value," he reasoned, "and then there's what somebody else will pay you for it."

He and his cohorts paid a local woman more than $1,100 for some of her old things near the end of the day.

"It's worth more than I thought it was," she said happily accepting her check, "and that's better than it just sitting there in my jewelry box."