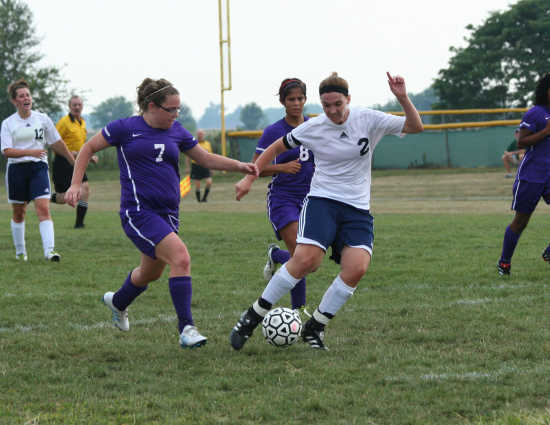 North Putnam's Cayla Kientz (2) sends a scoring shot toward the goal in the Cougars' 3-1 win over Greencastle Thursday.

ROACHDALE -- Thursday night could be a pivotal match for the North Putnam girls' soccer team. The win over Greencastle moved the Cougars to 2-0 on the season, but more importantly, it was North Putnam first win over the Tiger Cubs in the program's history.

"That is probably the best win ever," North Putnam head coach Willie Gaskins said. "It's a long time coming because Greencastle -- that's the first time we've beat Greencastle. It just feels awesome. I didn't do anything but stand on the sideline and yell out."

Early on the two squads fought evenly, with both teams pressing each other and waiting for the moment to strike. For GHS, that moment came with 24:28 on the clock when Melody White dribbled a shot under North Putnam keeper Lydia Volland. It would turn out to be the only blemish on Volland's record on the night.

With the Tiger Cubs up 1-0, the Cougars focused and began pressing even more, creating some much needed opportunities. Maggie Pinney dribbled her way through and past some GHS defenders to even the score at 1-all with 25:59 remaining in the first half.

The score remained tied at the half, but North Putnam quickly turned the tide in the second half.

Cayla Kientz scored at the 34:08 mark to provide the Cougars with all the cushion it would need. Pinney added another goal with 18:31 to put the Cougars in front 3-1 and ultimately give the Cougars the victory.

Gaskins said the team put together the basics needed to get a win on the night. The Cougars were very aggressive for the majority of the game, which is something Gaskins said they worked on during the off-season.

"That's something I've pushed on them," he said. "Aggressiveness isn't something you can necessarily teach That's what we worked on most of the summer with some of the girls."

Greencastle head coach Curt Bingman said the Tiger Cubs loss was simple to dissect. His team didn't do a good job controlling the ball and it cost them dearly.

"That's what cost us the game," he said. "Just losing and giving away the ball. They played better than they did Tuesday actually going to the ball and actually fighting for it, but it's hard to come back from a 15-0 loss on a Tuesday and then immediately play on a Thursday and try to get the girls mentally back into the game.

"We got outplayed. They controlled the ball better and we just gave it away too much and it cost us in the long run." Bingman added.

On the flip side, Gaskins was raining praise over his entire team for the job they did. With the win, the Cougars take possession of the "Golden Boot", a traveling trophy that will be up for grabs each time the Cougars and Tiger Cubs face off from now on.

"I just can't say enough about my captains and my forwards -- it's field wide," Gaskins said. "It's not just one player, I tell my team all the time, we win as team not as individuals. So when we put it all together, that's when we'll make it happen. That's when we'll make the work happen.

"I'm just ecstatic right now. I really wish I could describe it, but I can't," he added.