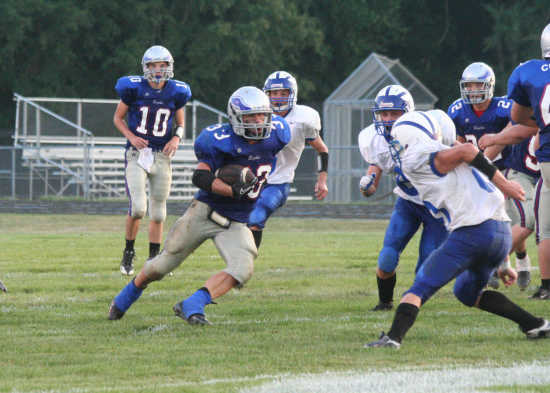 With members of the 1986 Class A state championship team on hand Friday night, the current incarnation of the Eagles utilized a strong running attack to upend Class A ranked Rockville 52-24.

It truly was a night of champions at South Putnam Friday. In addition to players from the '86 championship team, the softball team, who captured the Class 2A state title in June, received their rings before the game began. Head football coach Troy Burgess was honored to share the field with both squads.

"We talked about it," Burgess said. "We weren't going to let those two state champions down. It means a lot to have both of them here. What that '86 team did, not just for South Putnam, but what they have done for Putnam County, is just amazing. I talk about it all the time. I'm very happy to be here and be a part of that tradition that Mark (Wildman) and his staff and that '86 team started 25 years ago.

"We talked about it a lot this week. It was our job to come out here and hopefully give them something they could be proud of," he added.

After the ring festivities were finished, the football squad went to work on the Rox and didn't waste any time putting points on the board.

On its first possession of the game, South Putnam tossed the ball to Rob Gibson, who instead of racing down the sideline, slowed and threw a bomb to Justin Bumgardner for a 33-yard touchdown strike only eight seconds into the ball game.

"We worked all week," Burgess said. "We know teams are going to load the box on us. We run the football and those type of plays work about once a season. We really felt like they would come out and load the box and try to lock us down out there and key on Robbie. It's something we worked on all week and it just happened to work out the way we drew it up in the dirt."

After a quick three and out from Rockville, South Putnam added to its total just three plays later. Gibson took the handoff from quarterback Seth Hammond and rode his driving offensive line before breaking out of the pack for a 45-yard touchdown. In less than two minutes, the Eagles had seized a 13-0 lead and they would never look back.

Gibson scored on the first play of the second quarter on a seven-yard touchdown putting South Putnam up 20-0. The Eagles' special teams came up big for its next touchdown.

Facing fourth and eight, the Rox decided to punt the ball, but the punter took too long and had to scramble. As he did, he attempted to punt the ball away, however, it hit one of his own players and deflected toward the Eagles' endzone. Josh Wilson jumped on the ball in the endzone for the touchdown to put the Eagles up 34-0.

Rockville scored before the half to cut the lead to 34-8, but South Putnam went to the locker room loose and continued to pressure the Rox in the second half.

In the second half, Lucas Lorian and Wade Custis added touchdowns for the Eagles, but it was their last score that was something special.

On what was already an emotionally charged night, brothers Joe and Andy Waters spoke to the team before the game began. The brothers lost their brother Jimmy while he fought in Afghanistan earlier this summer and Friday would have been his 22nd birthday. It has a chance to seize the moment and Joe accomplished just that.

With the game well in hand, Burgess put in his junior varsity offense, which included Joe Waters. Four plays after the JV offense took the field, Waters streaked in from 35-yards out for the Eagles' final score of the night.

"It was a very special night for those two young men -- and then for Joe to get a touchdown. It doesn't bring anybody back, but what a great pick me up for a great family. A great guy, great kids and a great family," Burgess said.

South Putnam defeated the Class A No. 5 ranked Rockville Rox handily in extremely hot conditions, but as Burgess said following the game, it was just another day in the office for his squad.

"It's huge," he said of the win. "I can't say enough about our kids. It was hot. A lot of schools moved their games back to 7:30 or 8. Our kids came out in pregame and we were full padded up -- helmets and shoulder pads. It was business as usual for our kids. I know it was hot, but it didn't affect our kids.

"Our kids were mentally tough and they were in good shape. I'm just proud of our kids. To come out with that kind of intensity and effort and then to be able to sustain that for 48 minutes of football, with it being this hot, it just says a lot about our kids. We've got a great group of kids here," Burgess added.