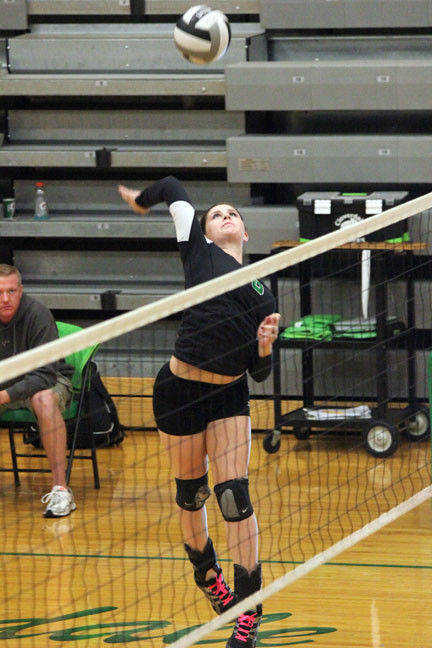 Cloverdale sophomore Adri Patterson goes up for a kill at the net Tuesday against South Putnam.

CLOVERDALE -- The Cloverdale volleyball team was able to take down the South Putnam Eagles by utilizing big hits at the net and strong serves, winning 25-13, 26-24 and 25-15.

South Putnam proved to be a scrappy opponent for the Clovers and kept the ball in play when normal squads would have been thinking for the next rally. Cloverdale head coach Kathy Moore knew the Eagles would be a worthy opponent.

"We always know that playing South Putnam is a challenge for us," Moore said. "They gave us a good game that second game. They were digging the ball well. They were attacking the ball well and things were going well for them. The other two games they were having trouble passing the ball and that's always what volleyball is all about is getting that first pass up. We go through that too."

The Clovers won the first set handily, winning 25-13, as the Eagles struggled to get the ball into a kill position. However, the Eagles rallied in the second set to give the Clovers a run for their money.

In the second set, South Putnam had the upper hand early, jumping out to a 6-2 lead, but the Clovers battled back to knot the game at 6-all. The Eagles were able to collect multiple runs in a short time to build a lead. They found themselves consistently ahead two to three points throughout the set, leading at one point 18-15. That's when Cloverdale made its run.

The Clovers fought back to tie the game at 19-all. Both teams surrendered points, but Cloverdale moved ahead 24-21 and were just one point away from taking the second set. But as they had all night, South Putnam showed its determination not to give in and tied the game at 24-all on some nice plays from Leanna Masters and Ericka Minor.

In the end though, Cloverdale was able to run off the final two points to win the set 26-24 and take a commanding 2-0 lead in the match. South Putnam did a great job in the second set of being in great position to dig the ball and keep the point alive. Head coach Renata Hendrickson said its something her squad has been working on.

"We've worked on a lot of drives about getting down to the floor and getting the balls up and not letting balls hit the floor. We do a good job of that," she said.

South was able to get multiple points by tipping the ball over the net, something Moore wants to see some improvement at.

"We're still working on covering the tips better. I'm not satisfied with that yet. They got several kills on us on just tipping the ball. Our serving was really good tonight. I'm proud of the girls tonight," Moore said.

The momentum the Eagles found in the second set escaped them in the third set as they watched as Cloverdale ran out to an 11-1 lead and never looked back. Cloverdale cruised to a 25-15 third set win behind some powerful kills from Bradanne Toney. Toney had 24 kills for the match.

South Putnam did a nice job of defending Cloverdale's strong net attack and Hendrickson said the team has gotten better with its coverage and reacting to where other teams are going to hit the ball. The Eagles found themselves out of position at times throughout the match and Hendrickson said it could be partly due to the team dealing with some recent changes.

"We've had a few changes recently and when you have change it always takes an adjusting period. We haven't really had any down time since we had those changes to just practice. We've had games every other day and we just need to get used to it and I think once we get used to our changes, we're going to flow a lot smoother," Hendrickson said.

As for Moore, she was pleased with how the team was able to fight and move towards some aspects of the game they've been working on.

"I'm very proud of the girls," Moore said. "They had resolve tonight and it's nice to see that. I've been on them about reducing the amount of errors that we are committing, especially consecutively. I've been on the about not letting ourselves get down three, four or five points in a game.

"We're trying to make some strides there and I think we did tonight," she added.