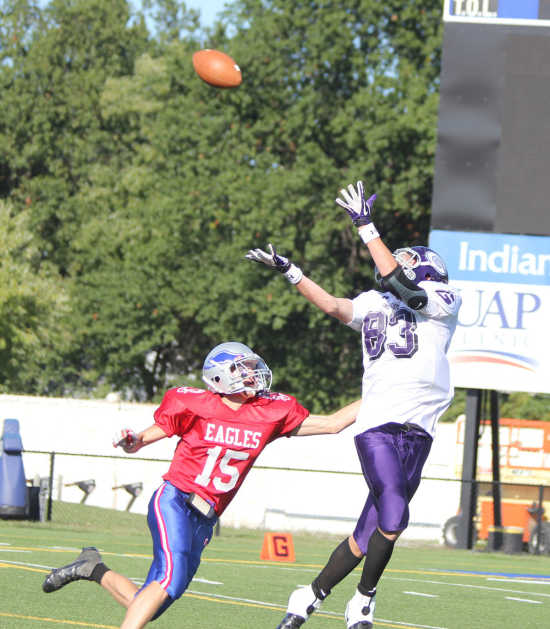 Senior night at Greencastle High School proved to be a memorable game for the home side as they took on Cloverdale Friday night.

After dropping two straight contests to county squads, Greencastle came back with a vengeance, stifling the Clovers in all phases of the game to run out 54-0 winners.

Greencastle's offense wasted little time in getting to the Cloverdale defense, with the combo of Nick Gilliam and Nick Hutcheson producing three touchdowns in the first quarter.

Gilliam first hit Hutcheson for a 16-yard score, then followed up with two seven yard strikes to give the Tiger Cubs a 20-0 lead after one quarter of play.

The Greencastle defense stifled the Cloverdale offense, allowing just 27 offensive yards in the first half.

Meanwhile, the hosts added three more scores in the second quarter to go into the half up 40-0.

Gilliam added two more scores through the air, one of 45 yards to Ryan Battin and a 16 yard pass to Chad Keyt. Derrick Lenihan scored in between the two on a six yard run.

Cloverdale got their only defensive stop of the game midway though the third quarter. Justin Grever intercepted Gilliam in the endzone as Greencastle threatened to score again.

Greencastle scored on their second possession in the third quarter as Lenihan plowed through multiple tackles on a 20 yard run to stretch the lead to 47-0.

Lenihan then capped the scoring with half of the fourth quarter remaining when he plowed in from 11 yards out to make the score 54-0.

Cloverdale then took two more blows on the chin when Trevor Lockwood left the game after a big hit and Justin Grever was taken off the field after an ankle injury.

In all, it was a win that got the Tiger Cubs and head coach Josh Buis back on track.

"This the first game this year I think the offense and defense came together and played. We did some really good things offensively and the same defensively," Buis said.

"Our kids did a good job executing tonight. I'm pleased."

The offense racked up a heady 511 yards, with the passing game being particularly effective.

"We liked our match-ups tonight. We've got good speed on the perimeter and we've got good height with Nick Hutcheson running those corner routes, which is a big match-up for anybody," Buis said.

The defense never allowed Cloverdale to get on track at any point, holding them to 66 total yards of offense.

"Our defensive front seven did a god job tonight of playing gaps on defense and pursuing to the ball. The last two weeks, we haven't gotten nine, ten guys to the football. We pursued hard tonight," Buis added.

"They did not execute early. We had a great week of practice last week and this week, but unlike last week, where it was competitive early, this one was not," Butler said.

"Sometimes it's hard to change a kid's previous viewpoints on an opponent. It just felt like through warm-ups to the end of the fourth quarter, we played flat.

"We weren't physical in most positions, on most plays. The kids realized that at halftime and came out in the third quarter attempting to play physical, but it was hard for them to get motivated."

With Owen Valley next Friday, Butler said that the squad needs to come back to the practice field and keep plugging away.

"This is the third week in a row that we've lost by a significant number of points. The last two weeks, our kids have come out the following of practice and done well," Butler said.

"Hopefully, they're able to do that this week without extra motivation from the coaching staff. Hopefully they realize the situation they're in, that they're playing some talented teams, and take that in to the last two games and into the tournament."

Cascade is the next challenge for Greencastle, though Buis said that it's a challenge the Tiger Cubs will need to be ready for.

"Cascade's a good football team. They got after us last year and gave us one of our losses. We have to come out Monday and start working and have a great week of practice," Buis said.

"Cascade's going to have a great gameplan for us. They're going to see some of the things on tape from the last two weeks. I'm sure they're going to sit back in coverage and if they do, we've got to be able to run the ball.

Next game -- Greencastle travels to Cascade and Cloverdale hosts Owen Valley for Homecoming next Friday.