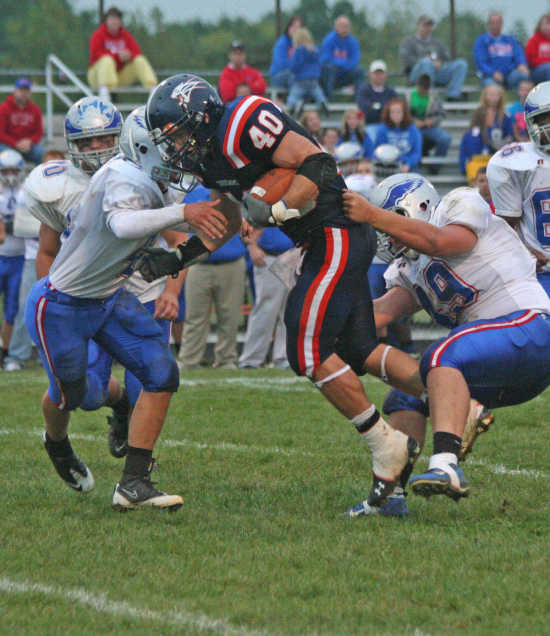 The state's No. 3-ranked 2A team (7-0, 4-0) closed in on its second straight unbeaten season with a relentless, merciless offense and a physical, active defense to lead 49-7 at halftime.

"I thought we played hard and took a step forward," first-year Cougars' coach Brian Crabtree said. "When we popped out to the big lead. We kept our intensity."

Fullback Hank Spencer gained 120 yards on 12 carries and had touchdown runs of 4, 9 and 1 yards for the Cougars. He also plugged holes and made bone-jarring tackles at linebacker.

"Hank brought his usual intensity and was good on both sides of the football," Crabrree said. "He broke a lot of tackles."

Quarterback Kolten Everts ran four times for 95 yards including a 33-yard touchdown run, keeping the ball on an option and finding a seam. He also completed 8-of-15 passes with two intercepted for 66 yards and two touchdowns.

Jake Smerage was outstanding on offense, defense and special teams. He caught an 8-yard touchdown pass from Everts, rushed for 20 yards on three carries and had punt returns of 35 and 39 yards to set up the Cougars deep into Monrovia territory.

"Jake is a heck of a player," Crabtree said. "He brings it every Friday."

North Putnam sacked Monrovia quarterback Austin Sichting four times and limited the Bulldogs (2-5, 2-2 WCC) to 74 yards rushing. Trea Dillon had 60 of them on one run for Monrovia's only touchdown late in the first half.

The Bulldogs lost their fourth straight, but they're a solid team. They lost to 2A No. 5-ranked Speedway 38-35 two weeks ago and 15-14 to Brown County last week, both on field goals inside the final two minutes.

Monrovia coach Mark Jaynes was impressed by the Cougars.

North Putnam scored on seven of its nine possessions in the first half. Crabtree used his bench in the second half. The Cougars had 14 players with rushing attempts and racked up 343 yards.

North Putnam's first half wasn't perfect, but it was close.

"If we'd played a perfect half, we'd have scored on every drive and we didn't do that," Crabtree said.

Everts completed a 14-yard pass to the speedy Shorter and Smerage to the edge for 11 yards. Spencer blasted inside for 5 and Smerage caught an 9-yard pass from Everts for the touchdown. Stephen Freund kicked the first of seven straight extra points.

The quick drive was a microcosm of North Putnam's versatile offense, a combination of speed (Shorter, Smerage) outside and strength and balance inside (Spencer) with accurate passing from Everts.

The Cougars drove 46 yards on three plays on their next possession, with Everts scoring from 33-yards, at 8 p.m.

North Putnam expanded its lead to 21-0 on Spencer's 4-yard touchdown run with 3:42 left in the first half. Spencer also had a 16 yard run and Everts completed passes of 9 yards to Shorter and 8 to Spencer on the drive.

Smerage's 39-yard punt return put the Cougars at the Monrovia 27 early in the second quarter.

Spencer broke loose for 18 yards on first down and scored two plays later on a 9-yard run and North Putnam led 28-0 with 10:40 left in the first half.

Linebacker Nate Bryan's interception of Sichting and a 11-yard return put North Putnam at the Monrovia 23.

The Cougars scored in three plays, a 6-yard run by Smerage, a 16-yard romp by Spencer and a 1-yard touchdown pass from Everts to Jameson Brewer for a 42-0 lead with 3:40 remaining in the half.

Dillon popped through a hole and sprinted 60 yards for Monrovia's touchdown.

North Putnam scored its seventh touchdown of the first half on Shorter's 33-yard run, completing a 68-yard, four play drive that overcame a 13-yard holding penalty. Spencer contributed with an 18-yard run and Smerage caught a 30-yard pass from Everts.