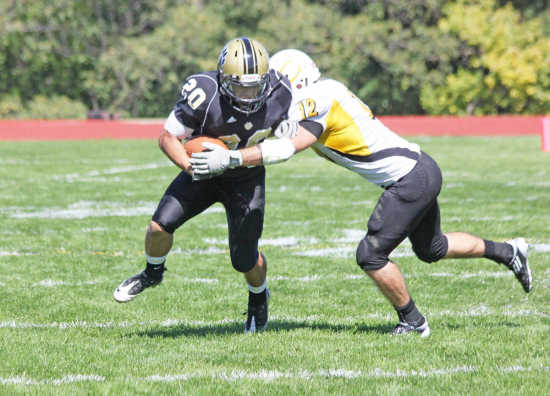 DePauw's Bryan Coleman shrugs of a would-be Centre tackler Saturday at Blackstock Stadium. Coleman rushed for 56 yards and a touchdown in the Tigers' 24-10 loss.

Too many turnovers, too many untimely penalties and too little experience were the keys Saturday in DePauw University's 24-10 loss to the visiting Centre College Colonels.

DePauw turned the ball over four times and was whistled for nine penalties while falling to 1-3 on the college football season.

"It comes back to discipline and we've got to do a better job as a football team playing this game in a disciplined fashion. Anytime you've got a team third and long or fourth and fourth down, you want to get off the field as a defense. But you can't have the personal foul penalties or any of those silly things," DePauw coach Robby Long said.

"And we had some penalties on offense too, when we were moving the ball that set us back. Just simple things like a receiver not lining up on the line or off the line, things that you do everyday in practice. We got to be more disciplined on game day."

Kirtley completed 15-of-32 passes for 141 yards and one interception and, out of the option offense, led the Tigers with 95 rushing yards.

Kirtley set up DePauw's only touchdown with 41 seconds left in the game, running 24 yards before he was stopped at the Centre 1-yard line on a helmet-to-helmet collision. The play ended his day.

On the next play, sophomore running back Bryan Coleman, who was also making his first varsity start, scored DePauw's lone touchdown. Coleman, who started in place of senior Jon Ellis, finished with 38 rushing yards.

"I felt like we did some really good things on offense today. We just can't have setbacks on either side of the ball," Long said.

Setbacks on both sides of the ball killed all DePauw momentum. Centre led 10-0 at halftime and 24-3 early in the fourth quarter.

Defense kept DePauw in the game early and some solid drives gave the large crowd something to cheer.

DePauw's offense responded with a balanced drive, converting on three third-down plays. Coleman had back-to-back runs of eight and nine yards and Kirtley found wide receiver Brody Schoen for gains of nine and 33 yards to reach the Centre 31.

But DePauw's inexperience showed when Coleman fumbled the pitch from Kirtley. Tackle Chris Lamping, who was injured in the fourth quarter, recovered the loose ball for DePauw, but the 10-yard setback killed the momentum.

Senior cornerback Steve Valdiserri gave DePauw another opportunity to score in the second quarter when he intercepted a pass, but the Tigers could not convert.

"As a defense you got to be ready to play every snap if you have to. You can never rely on the offense or special teams to give you a break. That's the mindset we're trying to instill in our defensive players," Long said.

"I thought they played hard. I thought they were in the right spots (but) we missed too many tackles today on defense, but the energy level and intensity was really good."

Centre took a 17-0 lead on the second play of the second half when Osterman found wide receiver Rob Melillo open over the middle of the field for a 45-yard touchdown.

Trailing 17-3, DePauw was handed an opportunity to get back into the game when Valdiserri recovered a Centre fumble at the Centre 35-yard line. But Centre sacked DePauw's Kirtley to end the threat and the visitors took a 17-3 lead into the fourth quarter.

Centre backed DePauw up to its own 4-yard line with a 33-yard punt to open the fourth quarter. Five plays later DePauw fumbled and Centre's Les Bolden returned the loose ball 20 yards for a touchdown the ended all hope of a rally.

DePauw will have two weeks to heal and regroup before traveling to Sewanee.