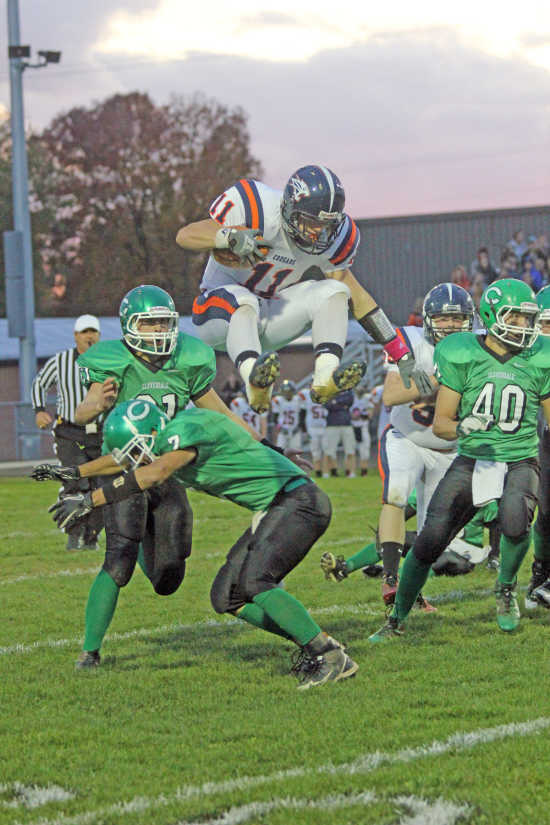 CLOVERDALE -- North Putnam flexed some muscle in the final game of the regular season Friday as it capped its second straight undefeated regular season with a 75-6 win over county rival Cloverdale.

The Cougars put up 43 first quarter points to break the game wide open with the host Clovers reeling, but refusing to give in. North Putnam had eight possessions in the first half Friday, turning each of them into a touchdown.

"The kids played hard. The entire team from the first kids out there all the way through the last kids to go in the game, I'm proud of their effort and they played North Putnam football tonight," North Putnam head coach Brian Crabtree said.

Cloverdale head coach John Butler said its difficult to simulate the speed and strength of a team like North Putnam in practice and felt his team was overwhelmed early with the Cougars.

"The main concern was our kids approach the football game at the beginning of the game," Butler said. "We didn't want our kids to approach the game in a non-competitive way.

"We didn't sugarcoat things for our kids and try to tell them something they weren't, but we told them they were going to be smaller. We told them those kids would probably going to be a lot stronger than them and we came up with a plan that we thought might give us some success to move the football offensively."

Tyler Shorter got things going for North Putnam on the third play of the game. Shorter took the handoff from quarterback Kolten Everts and turned the corner with his eyes clearly on the endzone. Defensively players are taught to tackle low and when Cloverdale's Trevor Lockwood went low, Shorter took to the air.

Shorter hurdled Lockwood and concluded his 35-yard run by crossing the goal line for the first of eight first half touchdowns for North Putnam. Shorter added another touchdown run in the half, with Hank Spencer rushing for two. Shorter also caught a 14-yard pass from Everts for a score and Nic Stanley had a 23-yard touchdown strike from Everts.

Even after enduring a 53-minute, 43 point first quarter, Cloverdale showed its grit and continue to fight as if the score was 0-0. After North Putnam's Allain St. Victor scored on a 29-yard run, Cloverdale was able to put its first points on the board.

On the ensuing kickoff, Cloverdale receiver Ethan Atwood took the kick at the 10-yard line and after a momentary pause, turned the ball up field and ran the ball back to the North Putnam five-yard line. The Cloverdale offense struggled, but two big penalties by North Putnam gave the Clovers possession at the one-yard line. From there Zack Couse bulldozed his way in for a one-yard score, bring the score to 50-6 with 5:27 remaining in the half.

That would be the score the teams took to the locker room. Following the break both team inserted players from the bench in an attempt to give their starters a little rest for the beginning of next week's sectional.

"It's a difficult thing especially on senior night," Butler said of pulling his guys. "At halftime we went in a talked to our kids and said, 'Look, what's our goal?' We've been preaching all year and that's to make it to the sectional healthy and compete for a sectional title. We put it to the kids 'What do you want to do? Do you want to risk it or do you want the younger ones to get some experience and get ready for next week?' And in my opinion they made the right decisions."

Even with their junior varsity players, North Putnam was able to continue to move the ball. The Cougars weren't looking to add to their lead, but their players were able to capitalize on Cloverdale miscues.

Trevor Smith and Jake Riggen added rushing scores in the third quarter, with Coy Flynn getting in on the act with a 46-yard touchdown run in the fourth quarter. North Putnam's final points of the night came when Beau Green picked off Cloverdale's Mark Osmialowski and returned it 30 yard for the score with 10:42 remaining.

North Putnam had more chances to score following the pick-six as when they recovered a fumble on the two-yard line. Instead of punching it in, the Cougars simply took a knee to run time off the clock.

With the regular season behind them, both teams now look forward to the postseason and both coaches spoke about the tournament following the game.

"We need to be sharp tonight," Crabtree said. "I feel like we took a step forward again. We made some improvements and we're going to have to because that sectional is a good one. I can't tell you how excited we are to get Speedway coming up and what follows that if we take care of business. This is what we've been working for.

"We had a good week of preparation. We talked about coming out and being more explosive than what we have been previously taking it to another level and I felt like they embraced that," he added.

For Butler and the Clovers, they will face 0-9 Riverton Parke, but as Butler pointed out, nothing is easy when it comes tournament time.

"You absolutely cannot underestimate anybody because everybody knows anything can happen. It's a matter of keeping our kids focused and sticking to the routine and approach this game like what have every other one," Butler said.

The third-ranked Cougars will travel to the No. 9 ranked Speedway Sparkplugs, while Cloverdale will host Riverton Parke. Both games will be Friday at 7 p.m.