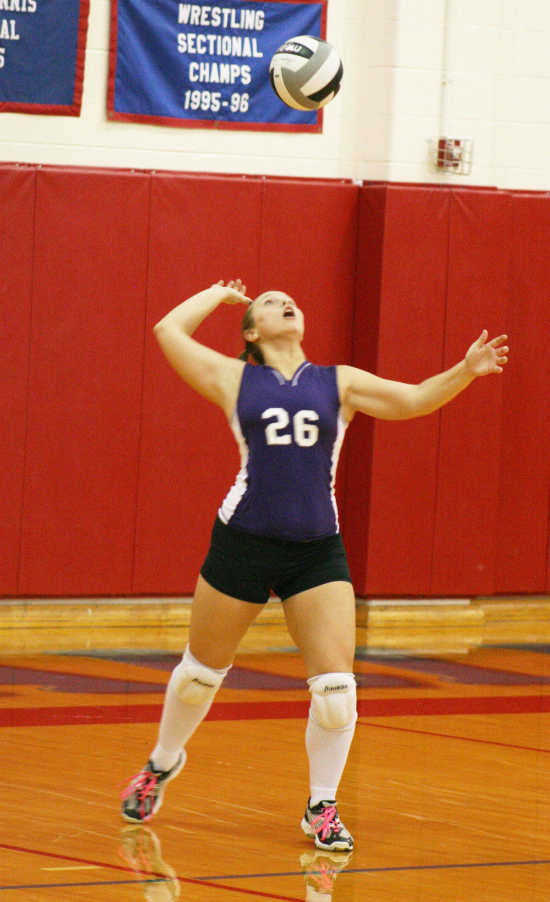 Kandice Phillips gets ready to fire a serve for GHS during Saturday's sectional semifinal.

SPENCER -- It's a universal truth of sports, even if not every coach wants to admit it. Sometimes you come up against bigger, faster horses.

"From where we started our season to where we finished right now, I'm very proud of the girls that they got beat by the better team," Spencer said. "Whenever you lose your last game, you want it to be to a better team. You don't want to go out say, we could've, should've won. They (Brown County) were the better team."

As important as momentum is in volleyball, Greencastle struggled all day to find it, falling behind early in all three games and never making up the deficits.

Playing behind did no favors for the Lady Tiger Cubs against their talented foes. Brown County used its advantages to keep GHS on the defensive throughout the match. Greencastle never really got its offensive game established.

"They kept us scrambling on defense, which didn't give us a whole lot of offense. When you play a team like that you've got to serve tough and you have to stay on offense to keep them on defense," Spencer said.

It also showed in the stat line, as Victoria Evans led the way with just seven kills. Rayleigh Amis and Shelby Earl were next with three each.

Greencastle showed its strongest play of the match in the opening game. After falling behind 93, they made a run on the service of senior Kandice Phillips, closing the lead to two points at 9-7.

Five more times in the game they closed the lead to two points, but couldn't get closer. Eagle junior Sasha Robinson, whose jump serve gave GHS fits, pushed Brown County to game point at 24-15 on a run of seven unanswered points.

Four points later, they finished off GHS for a 1-0 lead in the match.

Game two was a struggle throughout for Greencastle with long service runs from the Eagles putting them in a deep hole.

Brown County made quick work of the game at 25-11.

Down 2-0 to a strong opponent, the writing was on the wall for the Lady Tiger Cubs, but Spencer liked the fight her team showed in the final game.

"We just didn't have the horses to go with them but our girls competed very well, even in that last set they didn't quit," she said. "We're just a click off from being able to play with them."

It took eight servers for either team to establish any momentum in game three, but once again it was the Eagles who seized it first. They got ahead 7-3 and eventually pushed the lead to 16-7.

A couple of small runs by GHS couldn't turn the tide, and they lost 25-15 to close the match.

For a team that struggled with inexperience throughout the year, Thursday's sectional opening win over West Vigo and the subsequent return for a Saturday game were big learning experiences.

Spencer hoped seeing an opponent like the Eagles showed her squad what it needs to do to take the next step as a program.

"When it comes sectional time, any kind of tourney time, it's always a different feel," Spencer said. "So I think that experience is invaluable. They know what they have to do to prepare to play.

"I'm hoping and believing that they're seeing that they can compete with other people," she added. "That team has three players playing club ball, which gives them valuable experience. They have a head start. So for our kids to be able to step in here and raise their level of play, it's got to be good for them to know what they have to do to play at that next level."

Saturday was the end of the road for GHS seniors Phillips, Kara Birt and Erika Davies. The coach thanked them for the contributions they've made to Greencastle volleyball.

"They are a very dedicated bunch of young ladies. We lost Erika early in the year with her torn ACL, but Kandice and Kara -- well all three of them -- gave everything they had every time they stepped on the court. That's the kind of leadership you need to bring a program along," Spencer said.

"They're going to be greatly missed for a lot of the things they do off the court, behind the scenes where nobody else sees or knows about. We're going to miss them."