Getting a charge out of the Volt 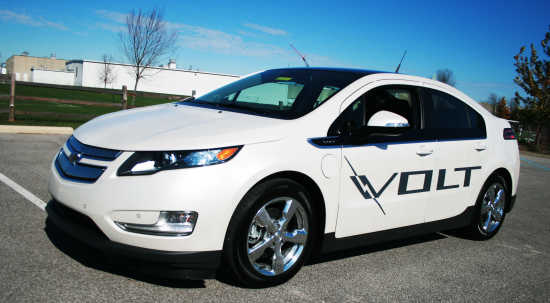 The 2012 Chevrolet Volt is more than an eco-friendly electric car. It gets an EPA-estimated 94 mpg for standard electric power use. The four-cylinder gasoline engine generates 149 horsepower and gets 37 mpg when in use.
Order this photo

Driving someone else's car has never been a particularly comfortable situation for me. I mean I've never wanted to be that guy -- the guy who repositions the driver's seat, messes with your mirrors and changes all the radio settings just to run an errand across town.

Nope, I'm apprehensive enough just trying to find the switch for the windshield wipers, figuring out how to turn on the lights, or heaven forbid, needing the defroster.

So when Steve Michael of York Chevrolet told me he had a new car he wanted me to drive, I was more than a little nervous. Little did I know it might as well have been George Jetson's flying car.

The York dealership last week took possession of its very first 2012 Chevrolet Volt -- an electric car that could arguably be the second most-important car in U.S. history behind the Model-T Ford. And last Friday afternoon I got to drive it home for a few days.

Now, I've ridden shot-bun in the Oscar Mayer Wienermobile, lounged in the back of a Hummer limo, and made the rounds in an Indianapolis 500 pace car, but this was truly something else.

Through the better part of five days I put the Volt through its paces. Worked my normal work schedule. Even drove it to Forest Hill Cemetery to cover a Civil War program. I suppose I was feeling a little like a crash test dummy.

It was back to reality for me Thursday, got in my little red Spyder and headed for town. I never realized my car was so noisy and rough, but that's how it felt after tooling around in the Volt for several days.

The Volt met or exceeded all expectations. The gauges kept telling me I was averaging 250 mpg. Of course, I wasn't using any gallons of gas on my trips around town, just electric power.

York will have the Volt available for test-drives the next few weeks. This one is a demo that can't be sold for six months. Standard price of the new Volt is $39,145.

Of course, all that comes with a projected annual fuel cost of only $1,000, and a five-year estimate of $7,600 in fuel savings, along with some nifty tax credits for buying an electric vehicle.

Just getting behind the wheel was essentially a sensory experience. Certainly the new-car smell was inviting. The style and accessories eye-catching. And then there was the sound of silence. Hello, darkness, my old friend ... Maybe I should have popped in a Simon and Garfunkel CD.

The Volt is an electric car with a range of 35 miles on a full battery charge (if you need or want to go farther -- or simply have "range anxiety" -- it has a nine-gallon gas tank with a 1.4-liter internal combustion engine.

But as long as the Volt is plugging along (pun intended) on electric power, it is extremely quiet. Accelerate and you get instant, consistent power, but no revving of the engine. I watched and listened as Steve drove away after dropping me back at the house Wednesday afternoon, and all I could hear was the sound of tires rubbing the pavement.

We experienced a little of that silence ourselves after stopping at Kroger the other day. As we left with our bananas, bread and all, we drove across the front of the store, heading west.

A fortysomething guy came out the door and walked right in front of us. He either didn't hear us coming, thought we would just stop on a dime because he was there, or he had some kind of cost-cutter death wish going on. Regardless, it seemed to reinforce the quiet of the Volt.

The interesting thing was I drove the Volt through the McDonald's drive-through twice without a single comment or second look. But other times, I had people rolling down their car windows to ask about it.

"What kind of car is that?" the guy in the next lane wanted to know despite the two-foot-tall letters spelling "Volt" on either side of the car.

"It's a Chevy," I deadpanned, just to bait him.

When I tell a couple others it is an electric car, they respond by glancing up and back the length of the Volt like they're looking for some giant orange extension cord, I suppose. Incidentally, that is stored in the trunk for recharging each night in the garage.

The guy who pulls up alongside in a white GMC truck gives us a big thumbs-up.

Me, too. But getting stared at all the time is making me more than a little self-conscious.

I can already envision the Putnam scanner entries ...

So just to be sure none of that might happen, I parked safely over near the dumpster at McDonald's and kept my eyes on the brightly animated gauges on the dash in front of me. After all, the Volt will apparently do 100 mph -- not that I will ever know (wink, wink).

There was but one more true test for this baby. Could the Volt be a chick magnet?

I slowed down and offered up my best Barry White ... "Hey, baby, want to get a charge out of my new car?" I ask the wife.

Ruth rolls her eyes and instead settles into the backseat of the four-door. Suddenly, I might as well have been driving Miss Daisy.

I guess that settles it. All the electricity ends there ...