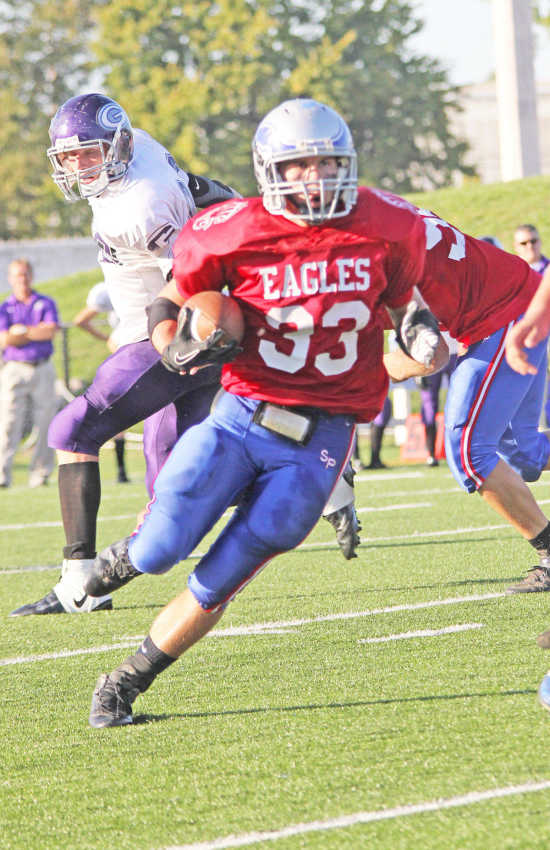 INDIANAPOLIS -- South Putnam will play for their first sectional title since 2005 after a 35-7 win over host Park Tudor Friday night.

After trouncing South Vermillion the week prior, the Eagles got off to another fast start as Rob Gibson intercepted Panther quarterback Jack Seymour on the game's fifth play.

Gibson would take the first snap for the visitors and throw a halfback pass. Justin Bumgardner came down with the ball for a 29-yard gain, setting up a Gibson five yard run for the opening score.

A trade of punts preceded the next score, this one for the hosts. Starting in Eagle territory, Park Tudor took nine plays before David Kroot scored from 13 yards out, tying the game at 7-7.

South Putnam responded on the following drive and took the lead for good.

Zack Smith took the kickoff following the Panther score to the home 44 yard line. The Eagles opened with two passes before Gibson and Smith ground the ball down to the two-yard line with six carries.

Seth Hammond took the scoring play on his own, sneaking in from two yards out to give the Eagles a 13-7 lead with the point after no good.

Park Tudor took the following possession and drove as far as the Eagle 12-yard line. Stalled at the 15, Panther kicker Armando Caceres missed a 32-yard field goal that would have cut the deficit in half.

Instead, South Putnam played add-on with a 10-play drive that ended when Hammond hit Gibson with a pass in the middle of the field.

The senior halfback made one move to avoid a tackler and raced 20 yards to finish off a 45-yard pass and catch for the touchdown. Gibson would add the two-point conversion to give the visitors a 21-7 lead.

Before the half ended, Park Tudor again drove deep in Eagle territory, only to again miss a 32-yard field goal and go into the half down 14 point.

Both teams traded a pair of punts to start the second half before the visitors struck again.

The two-play drive started with Smith losing two yards on a swing pass before Gibson torched the Panther secondary on a medium range pass that turned into a 72-yard touchdown.

In response, the hosts went on a grinding 21-play drive, aided by several Eagle penalties. But even with seven plays from inside the Eagle 10-yard line, the hosts could not find a way through and turned the ball over on the two-yard line.

After a turnover on downs, the Eagles used one Gibson run to finalize the scoring for the evening as the halfback rolled 59 yards for the score to give the Eagles a 35-7 lead, one that would hold for the final two minutes of the game.

Afterward, Eagle head coach Troy Burgess said it was a tougher win than the score suggested.

"That's the best three-win football team that I've seen. They play a great schedule, they're physical and they're athletic. That's a good football team," Burgess said.

"Rob really set the tone, getting that interception for us. The two play score really helped us get off to a good start.

"We knew they were going to come out and try to throw the football, but they ran it at us and picked up some yards early in big chunks. They caught us on our heels a little bit, playing the pass a little too much.

"Coach (Nathan) Aker made a couple of adjustments at halftime. He changed some things up in our secondary and up front. It was a combination of him making the changes and our kids playing their tails off," Burgess added.

The play of the defense was no better noticed than on the goal line stand, where the Eagle defense held off the Panthers seven times from inside their own 10 yard line, including four straight inside the Eagle 5.

"What a great stand. The defense stepped up, made a great stand and you could see that let the air out of Park Tudor when we made that stop," Burgess said.

Offensively, the Eagles were able to continue the good play from the prior week.

"We threw well, caught the ball well, our pass protection was pretty good, and when we're able to do that, it loosened Park Tudor up a little. Our running game took over from there and our guys up front did a real nice job late in the third and fourth quarters to win the line of scrimmage battle," Burgess said.

The Eagles will play for the Sectional 30 title next Friday against North Putnam who, since their last victory in 2005, have beaten the Eagles by a combined score of 289-33 over eight contests. Burgess said the game will be a challenge.

"North is tremendously talented. They're good offensively, they're very good defensively. It starts with the jet sweep," Burgess said.

"They run that play to perfection. We've got to do a better job of containing it a little bit. I say that, if you do contain it, then in comes (Hank) Spencer right up the middle or (Kolten) Everts throwing the football.

"They've got a lot of weapons. For us to compete and win that ball game we've got to be disciplined, do our jobs, and offensively, we've got to pick up our assignments and not turn the ball over."

Next game -- South Putnam travels to North Putnam for the Sectional 30 Final next Friday.