Giamatti's 'Win Win' -- the title says it all 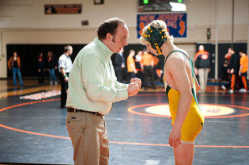 Paul Giamatti (left) and Alex Shaffer star in Thomas McCarthy's "Win WIn". McCarthy is nominated for an Independant Spirit Award for his screenplay.

Thomas McCarthy's "Win Win" is that typical wonderful film that flies under the radar for most of the year only to be resurrected come award season. While it only snagged one nomination at the Independent Spirit Awards, "Win Win" should be in the mix when nominations for the Golden Globes and Oscars are announced.

"Win Win" follows Mike Flaherty (Paul Giamatti), a lawyer whose practice is in slow decline and a failing high school wrestling coach. Feeling the economic pinch, Mike resorts to taking charge of an elderly client to cash in on some extra income. However, instead of doing as he instructs the court he will, he sticks Leo (Burt Young) into a retirement home and calls it a day.

With his newfound added income, Mike's feeling good about life except for the fact his wrestling team stinks. Kyle joins in a practice and Mike's finally found what he's been looking for. Kyle's a state-qualifying wrestler who's troubled past caused him to walk away from the sport, so Mike enrolled him in school and gives him a spot on the team.

The duo sees their lives taking a turn for the better, but when Kyle's mom and Leo's daughter Cindy (Melanie Lynskey) shows up and her presence can bring Mike's life crumbling down around him. She wants to take Mike's star athlete away and expose his actions regarding Leo, which could mean the end of his career.

What I found endearing about 'Win Win" was its feel of being genuine. At times you forget you're watching a film as the actor's are so understated that it's more like being a fly on the wall.

McCarthy's storytelling ability is top notch. He wrote the screenplays for the acclaimed films "The Station Agent" and "The Visitor" as part of the team that came up with the story for the Oscar-winning Pixar flick "Up". He continues that tradition with "Win Win". The story moves at a great pace and hit the peaks and valleys perfectly.

Giamatti put in another strong performance as Mike. Giamatti's versatility as an actor is amazing. Whether it's providing the voice for an animated character ("The Ant Bully") or playing a former president ("John Adams"), Giamatti seldom disappoints. Plus, he must never sleep. Giamatti was part of six films in 2011 and is already slated for three in 2012.

The actor who really caught my attention in this film however was Shaffer. This marks the actor's feature film debut and his effortless performance is amazing. At no point do you see the actor Alex Shaffer, you consistently see the troubled teen Kyle Timmons. Veteran actors would kill for that ability.

Another highlight in the film is the banter between Giamatti, Jeffrey Tambor (Stephen) and Bobby Cannavale (Terry). The dynamic between the actors provides some hilarious moments, which result in quick one-liners or just a quick glance.

Final Cut: While it's not getting much love early in the awards season, I can't see "Win Win" being ignored. McCarthy should be a shoo-in for his screenplay and I would love to see Shaffer get a nod for Best Supporting Actor. "Win Win" is a great little film with a good message that teaches, but doesn't preach.