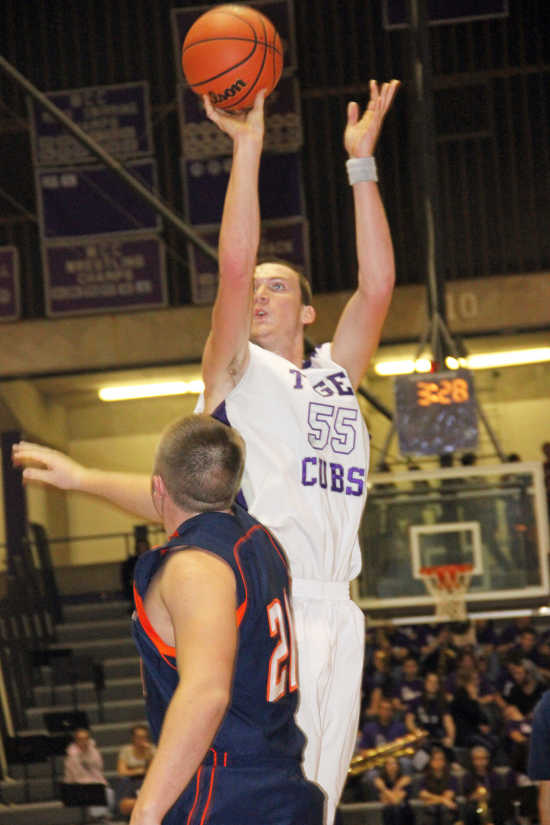 GHS senior Nick Hutcheson scored 28 points against North Putnam in Friday's Putnam County Classic to help propel the Tiger Cubs into the championship game. Hutcheson also joined the 1,000 point club on the night, with his 28 points giving him 1,004 for his career.

In the process, senior forward Nick Hutcheson passed the 1,000 point barrier, but it would take more than Hutcheson's 28 points on the evening to beat back a fierce Cougar resistance.

Greencastle started off quickly with the inside duo of Hutcheson and Jesse Tesmer combining for 14 of the hosts' 16 first quarter points.

North Putnam, however, led for a large swath of the quarter with good shooting from behind the three point line and quick ball movement.

The Cougars would take a lead into halftime as Greencastle couldn't get other parts of their game going.

Outside of Tesmer and Hutcheson, the hosts scored four points in the first half, which allowed the more balanced attack of North Putnam to take the lead with over a minute to go in the second period and finish the half leading 30-28.

Neither side looked ready to give an inch in the third period as the lead traded hands six times. Tesmer started the period with a three-point play but the Cougars grabbed the lead back through Kolten Everts.

Brad Haussin finally provided the ammunition from deep Greencastle had lacked, knocking down three three-point shots in the period, taking the lead back for the host each time he connected.

The last one proved to be crucial as. When it fell with two seconds left on the clock, it gave the Tiger Cubs the lead for good at 49-47.

Even after Hutcheson started the final frame with a dunk, the Cougars attacked headlong, with Jameson Brewer replying with a lay-up.

Hayden Stuckwisch then nailed back-to-back three-pointers for the Tiger Cubs, only to see each answered by three's from Braydon Porter and Austin Day to keep the Cougars within striking distance at 57-55.

But from there, the Cougars seemed to finally run out of steam as Greencastle slowly pulled away over the final 4:28.

Stuckwisch effectively sealed the game with his third three of the period at the 2:30 mark in the fourth quarter and Greencastle rode out the final two minutes to put themselves back into the title game for the seventh straight year.

Afterwards, Hutcheson, who now sits on 1,004 points for his career, was able to sum up the feeling for both the win and the milestone.

"It's awesome. It's been a long ride and it's been fun playing varsity all four years. It feels good to finally get there. It's taken awhile," Hutcheson said.

"But it's also going to be awesome to play for a county championship tomorrow night and we're really looking forward to it."

Greencastle head coach Troy Greenlee was happy with the win.

"I thought both teams competed hard. Both teams had runs that seemed to sway the game one way or the other. I thought at time our kids let their runs affect their body language a little bit negatively but we were able to overcome that," Greenlee said.

"We had some guys in the second half come up and hit some big shots. I thought we did enough defensively but North hit a lot of shots. At times we had a hand in their face and they still hit shots, so you've got to give them credit for that."

"We were trying to contain the interior as much as possible. We had our guys pinching down on the post. With them going 6'7" and 6'8" on the front line, you have to take care of the interior first," Martindale said.

"These guys gave everything they had. I couldn't be more proud right now of the effort they gave and I can't be more proud to be there coach because these guys have invested the time and they've worked very hard."

Martindale added the Cougars would still be aiming high in the consolation game against Cloverdale.

"They're hungry for their first win. They know what's coming from Cloverdale. We played them three times last year so we're going to have to come back and bring the same intensity, effort and enthusiasm and things will take care of themselves," Martindale said.

Greencastle will meet South Putnam in the title game afterwards, and Greenlee said the squad needed to focus on the defensive end.

"Defensively, we have to be more disciplined. When we played disciplined defense we did a pretty good job of making them earn their points. When we gambled, they were able to create things more effectively," Greenlee said.

"Those are big things we have to make sure we're keying on and tomorrow night we've got to be better defensively. We've got to make them guard us on the perimeter and on the inside and hopefully we're ready to go."

Next games -- North Putnam will play Cloverdale in the consolation game of the Putnam County Classic Saturday at 6:30. Greencastle will play South Putnam in the title game following the first game.