Greencastle picks up 69-26 win over Clovers 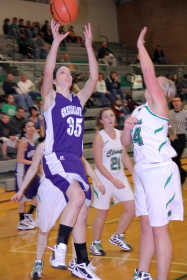 Greencastle's Taylor Pruitt puts up two of her game-high 20 points during Friday's game.
Order this photo

CLOVERDALE -- Greencastle's game plan revealed itself early and often when they traveled to Cloverdale Friday. The Tiger Cubs pressured the host Clovers and jumped out to a 38-12 en route to a 69-26 victory.

"Weak side rebound -- we were crashing those and Jessi Covert had a great game... she played really well and played really hard," Key said.

Greencastle's defensive pressure allowed the Tiger Cubs to seize a 17-4 first quarter lead to ignite their offensive output in the first half. Taylor Pruitt scored 12 points in the first half, with Jessi Covert scoring 11 points.

Cloverdale gathered itself at the half and outscored the Tiger Cubs in the third quarter 11-10 with Paige Gruener leading the charge with four points. Head coach Matthew Langdon liked his team's effort coming out of the break.

"We came out with a little more effort in the second half. You just have to give a lot of credit to Coach Key and what he's done there. He's built up a good program and the girls just have that toughness that we're looking for," Langdon said.

However, Cloverdale couldn't sustain its newfound momentum and were outscored 21-3 in the final period as the Tiger Cubs cruised to a 69-26 victory.

Key noted the effect the defensive pressure had on the outcome of the game and is pleased to say he has a team that's willing to work hard to see those types of results.

"I feel like we had some girls who are willing to work hard. I might have to drag them a little bit, but they're willing to work hard," Key said. "Callan (Taylor) did a great job getting up on people. Hannah and Taylor do a great job understanding when we can trap and when we can't trap and we're trying to bring everyone else along. We're getting there.

"We got a little tired at times, but our pressure defense did what it was supposed to do in the first half," he added.

While his team dropped to 3-5 on the season, Langdon feels his team is in good shape.

"We feel like we're going in the right direction for the first time in a while," he said.

Landgon was proud of the fact his girls continued to work hard in the second half despite the sizable GHS lead and knows there are getting better with each game.

Greencastle's Taylor Pruitt scored a game-high 20 points to lead the GHS, with Covert adding 13 off the bench. Erynn Beck also scored in double figures, recording 10 points on the night. Cloverdale was led by Gruener and Bailee Stevens with six points each.

Greencastle will host Rockville Thursday at 7:30 p.m., while the Clovers will travel to Monrovia next Friday at 6 p.m.