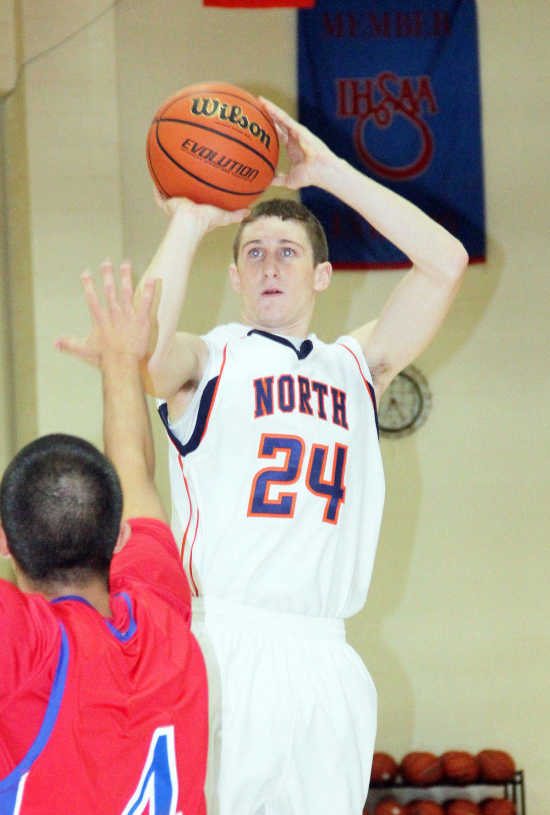 ROACHDALE -- North Putnam boys' basketball team survived a fourth quarter push and poured it on late in securing their second win of the season over Turkey Run, 51-37.

The Cougars started off the game with strong play from the backcourt as Kolten Everts, Tim Wiltermood and Braydon Porter scored 13 of the home side's 16 points in the frame.

North held a six-point advantage at the end of the first, but lost their shooting touch as the Warriors went on a 10-2 run for the bulk of the quarter to briefly take the lead at 20-18.

The home side scored six of the last eight points to take a 24-22 lead into halftime.

After the break, Jameson Brewer took the game to the Warriors, opening the period with a three-point shot and scoring nine points in the frame. This helped push the Cougar lead to seven entering the fourth quarter.

Early on in the period, Wiltermood knocked a pass away and saved it from going out of play to Brewer. The junior drove in and dropped the ball off to Nate Bryan, who scored and drew the foul, seemingly capturing the momentum of the game.

But after extending the lead to 10, Turkey Run cut the lead down to four. Riley Sunderman scored six straight points, but more importantly drew two fouls apiece on Bryan and Brewer, putting them both on four fouls.

With the game in the balance, Brewer proved to be the man of the hour.

Blocking four Sunderman shots in the period, snaring numerous offensive and defensive rebounds and scoring six of his game-high 18 points late in the quarter, Brewer pulled the Cougars along in the final two minutes.

Things nearly got out of hand as Sunderman committed a flagrant foul on Wiltermood in the final minutes, but the senior kept cool to prevent the Cougars from losing focus and helped the home side pick up their second win of the season.

North Putnam head coach Nathan Martindale said the game didn't go quite according to plan, but the result was the important part.

"It's always great when you get a win. It wasn't exactly how we drew it up. We shot very poorly from the free throw line. We probably shot about fifty per kid yesterday in practice," Martindale said.

He was also happy wit his team's defensive play.

"Defensively, I thought the guys played really well. It's what kept us in the game when our shots weren't falling and our free throws weren't going in," Martindale added.

"But we're building. We got a good game in on both ends of the floor. It was a total team effort. Guys were playing hard. They were battling, and when shots aren't falling, that's what you've got to do."

Martindale added the original game plan was more in focus during the second half, namely pounding the ball inside and negating Turkey Run's Jeff Woods.

"We knew going into the game what we wanted to do. We thought we could hurt them on the interior with Jameson and Nate. We were trying to exploit that," Martindale said.

"On the defensive end, Kolten did a nice job on Woods. We held him to nine points, and he's a kid who can light it up when he gets hot. Even when Nick (Stanley) came in to spell Kolten, they did a nice job of guarding him."

The Cougars hadn't been in many close games this season, but Martindale said the squad looked like they had pieced together several things.

"It's something new, that the kids have to understand how to play with a lead. I think we've had situations here in the last couple of ballgames where we've had that," Martindale said.

"We said before the game we've got to bring energy right off the bat. We've got to play hard early. I said if we take care of those two things, we'll put ourselves in positions to win ballgames.

Martindale said team put together a full game performance on the night.

"We played hard for thirty-two minutes. We can't have any lulls. We had a lull in the second quarter that I didn't particularly like," Martindale added.

"It's eliminating those lulls, getting those kids to play hard for thirty-two minutes and it's a step-by-step process," he added.

"It's a long drive up there, so those kids have got to be mentally focused, because tomorrow night is going to be more about focus than it is anything else."

"We've got to come in focused, play with energy and enthusiasm and we'll keep ourselves in the ball game with a chance to win,' he added.