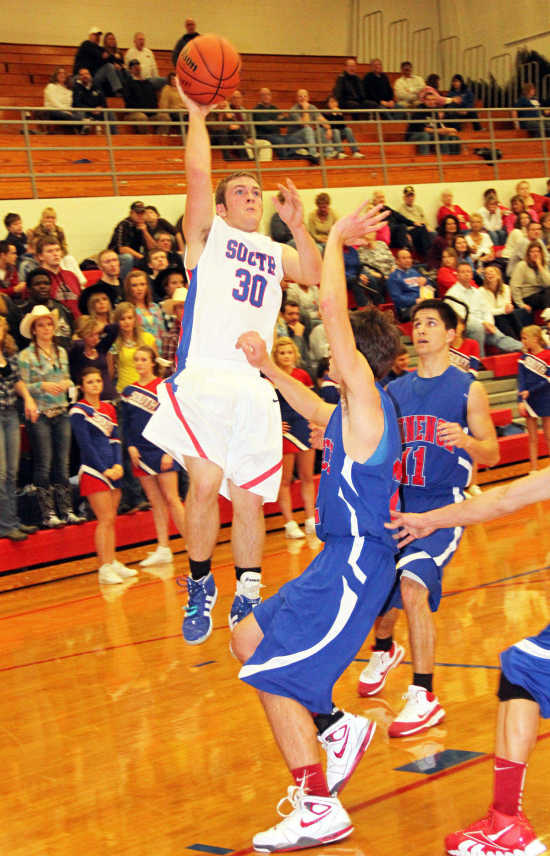 With their leading scorer and rebounder on the bench with an injury, South Putnam put together a stellar defensive effort to win its fourth game of the season. The Eagle defense stymied Eminence's leading scorer Dawson Gore to send the Eels to their sixth straight loss, 51-43.

Senior Rob Gibson was given the duties of shutting down Gore, with help from Justin Bumgardner off the bench. The duo limited Gore to six first half points and added another three late in the game. Head coach Troy Burgess acknowledged the efforts of Gibson and Bumgardner following the win.

"That was a good one for us," Burgess said of the win. "I thought Rob (Gibson) just played tremendous on the Gore kid. Bum (Justin Bumgardner) came off the bench there when Rob needed a break there a couple times and did a good job on him. We hold that kid to nine points and he's averaging in the 20s. He's a very, very good player and I thought Rob took it upon himself and then when Bum came in -- that was a big key for us."

South Putnam's offense got rolling early, but a late charge by the Eels had the host Eagles down 10-7 after one quarter. With less than four minutes remaining before the half, the Eagles regained the lead 16-15 and never looked back.

Both teams made the same amount of shots in the first half, but the difference came at the free throw line. South Putnam edged the Eels 6-2 at the line to account for their lead. Their free throw skill would come in handy as the game crept closer to its end Friday.

Following the break, it was more of the same for the Eagles. Gibson kept his intense defensive pressure on Gore, which caused the senior fits all night. The Eagle offense continued to roll as well, outscoring the Eels 14-9 in the quarter

With a 35-26 edge entering the fourth quarter, South Putnam staved off a late charge by Eminence with skilled free throw shooting. Despite the Eels hitting four more baskets in the second half, the Eagles were able to knock down 10-of-12 free throw in the final stanza to allow them to pick up their fourth win of the year.

Trey Moore, the leading scorer and rebounded for the Eagles, was on the bench due to injury, but the Eagles didn't miss a beat on the night. Arnold led the charge with a game-high 17 points, with Pell and Gibson chipping in eight each. Burgess said he put it on his team as to who would be the one to step up and make a difference.

"We talked to them before the game, 'who was going to step up tonight'? When you lose your leading scorer and your leading rebounder, somebody had to step up. Sawyer had 17 tonight, Rob and Logan pitched in eight and that's six more points per player than what they're averaging. Our big guys had six points tonight. Everybody picked up the slack for Trey," Burgess said.

South Putnam will host Edgewood tonight with the junior varsity set to tip at 6 p.m.