Bray will not seek re-election to Senate District 37 seat 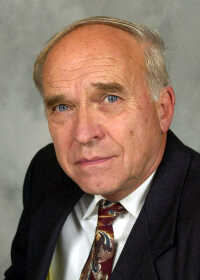 The 77-year-old Bray, a lifelong Hoosier and military veteran, has served in the Indiana Senate since 1992.

"Under the leadership of my Senate colleagues, our caucus has done an incredible amount of good for Hoosiers across Indiana and I am honored to call them friends," Sen. Bray said in commenting on the timing of his retirement.

"The Indiana Senate has tremendous respect for Richard and we are grateful for his many years of service to the Indiana General Assembly, both during his time in the House and Senate," Long said.

"Under his leadership on numerous committees in the Senate as well as serving in leadership as the assistant majority caucus chair, he has championed causes that have improved the lives of Hoosiers everywhere. Richard has been a very effective and dedicated leader on behalf of his constituents in the Senate and he will be greatly missed."

Sen. Bray was born in Martinsville in 1934 and, after graduating from Martinsville High School, attended Indiana University where he earned his bachelor's degree and his Juris Doctorate.

Before beginning his political career, Bray served in the U.S. Army and later as a major in the Indiana National Guard.

In 1958, he was elected prosecuting attorney of Morgan County. In 1970, he returned to his law practice in Martinsville and, in 1974, was elected to the Indiana House of Representatives, where he served for 18 years until running for the Indiana Senate in 1992.

Bray has been a member of numerous committees. They include service as chairman of the Senate Judiciary Committee and ranking member of both the Senate Ethics Committee as well as the Commission on Courts.

Sen. Bray is scheduled to be in Greencastle Saturday to attend the first Legislative Update of the 2012 session along with District 24 State Sen. Connie Lawson (R-Danville) and District 44 State Rep. Jim Baird (R-Greencastle). The program is set for 8 a.m. at the Putnam County Farm Bureau Boardroom.