The jury's in: Judge LaViolette's the Chamber's Citizen of the Year 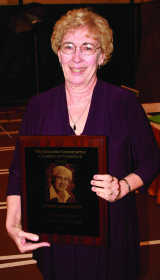 Judge Diana LaViolette displays the plaque proclaiming her the 2011 Putnam County Citizen of the Year. The honor was bestowed upon LaViolette Saturday at the Greater Greencastle Chamber of Commerce annual dinner.

Judged by a jury of her peers, Judge Diana LaViolette has been found guilty of being an engaged, dedicated, caring contributor to the very fabric of the Putnam County community.

With such acknowledgement Saturday night, she was named the 2011 Citizen of the Year by the Greater Greencastle Chamber of Commerce during its annual membership dinner at the DePauw University Tennis and Track Center.

Although admittedly realizing she was the 2011 winner as her accomplishments were being anonymously enumerated, LaViolette was nonetheless shocked by the selection.

"I honestly don't know how to deal with 'Citizen of the Year,'" she said from the from the podium after receiving a plaque from out-going Chamber President Amber Bowers and a standing ovation from the 300 people in attendance.

"I could better deal with it," she suggested, "if you called me a 'good citizen.'

"I love Greencastle," she said, "this is a wonderful, wonderful place."

Nonetheless, as the first female Putnam Circuit Court judge, a position she held for 12 years, LaViolette says she saw a lot of the bad side of things.

"People I deal with don't particularly like Greencastle," the senior judge to both Putnam Circuit and Superior courts said. "They don't necessarily want to be here."

During her judicial tenure, she created or helped create a number of programs addressing the needs of families, children and youth, including Children Coping With Divorce, GRASP (in which suspended students attend classes and engage in community service rather than roaming the streets or sitting at home), CASA (Court Appointed Special Advocates) and the Putnam County Youth Development Commission.

In addition to her time on the bench (1992-2003), she has served on the boards of Putnam County United Way, the A-Way Home Shelter, Putnam County Family Support Services and Greencastle Kiwanis Club.

However, as one of several nomination letters noted, "it has been her years on the Putnam Circuit Court bench that distinguish her service to our community."

Another letter was equally effusive in her praise.

"She has spent much of her life in Putnam County, and her greatest gift to our community is her long-time commitment and selfless giving of her time, talent and heart to the people she encounters and the responsibilities and causes she champions," the nomination noted.

"She has been a teacher, a mother, a mentor and a judge, and we are all better for knowing her."

A close associate also spoke to LaViolette's qualities as a friend, noting for effect, "can there be any greater social good?"

"No matter how busy with her obligations and duties as Putnam Circuit Court judge, Diana LaViolette has always had time for her many friends of all ages," she noted. "She is loyal, faithful and generous in giving of herself without reservation to her friends.

"Whether reading to seniors at Asbury Towers or lending a helping hand and a broad shoulder when needed, she is the kind of friend who enriches not only the lives of individuals but our society as well."

The evening also included the announcement of 2011 Chamber Director of the Year, presented to Jennifer Bedwell, marketing director of Putnam County Hospital.

The evening concluded with Jason Huneke, a 2008 "America's Got Talent' contestant, entertaining the group with a comedy-juggling act.