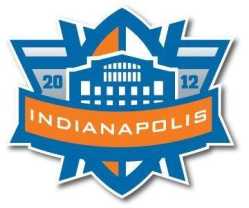 INDIANAPOLIS -- The Super Bowl has come and gone and I'm finally done sleeping off its effects. You literally spend most of your time at the game in somewhat of a stupor, as the intoxicating vibes of football being played on the biggest stage flow over you. I loved it, I would do it again, but I'm glad it's over.

Not that I didn't love every minute of it, but it wears you out. I was there for a single day, so I can't image the people who have been there throughout the week. Maybe if you're here all week, the actual experience of game day is a relief more than a burden.

The best part of the experience had to be the kickoff and celebration at the end. I can't get enough of grown men acting like a bunch of boys. The only disappointing moment of the celebration was the confetti and streamers. I have more action at my daughter's birthday parties. Sure there was a lot of it, but it didn't go anywhere. Straight up and straight down is b-o-r-i-n-g. Get some wind whipping those things around and let's get crazy.

I've had tons of questions about my seats. Most people assumed that I was standing shoulder to shoulder with Eli on the sidelines, and I hate to ruin the illusion, but that was far from the truth. I was one row from the top of Lucas Oil Stadium.

It was high enough in the stadium that we were given small lights to illuminate our workspace as we needed because there we no lights. Seriously. Still, the height allowed for a clear view of the field, which was great.

My Super Bowl adventure continued long after scoreboard was turned off and the players had left the field. I stuck around watching the aftermath of a Super Bowl and as it was with the build-up to the game, the action was smooth and deliberate around the stadium. Everything was going as planned, that was until I decided it was time for my exit.

Asking where I needed to go, a helpful person pointed me toward an exit and told me to "have a super night," a phrase I heard utter no less than 50 times during my day at the big game. I made my way down the stairs; exited into the brisk, cool February air only to find I had no idea where I was. I walked a short distance and sought the help of another red shirt and received the information I knew was coming, but didn't want to hear.

"Sir, I think you're on the wrong side," the man said. Taking another look around I realized he was right and made my way around the stadium, lugging my bag and laptop. While there weren't many people outside the stadium, the buzz of the crowd just beyond the security perimeter could be heard.

While I was hoping to see some crazy action on my way back to my vehicle, all I witnessed were a small number of fans taking photos and enjoying their final minutes or hours in Indianapolis. Within minutes, I was on the road, heading west and my next stop was home.

But as with any high, the crash was equally was strong. I was riding the great vibes of the big game on the way home when the specter of sleep hit me like a sledgehammer between Avon and Danville. I tried to regain the euphoria of the game if for nothing else than to make it home in one piece, but I only managed to find a faint whisper that went from recounting the game's big moments to singing a soft lullaby the longer the trek took.

It's a full day later and I'm still trying to process the amount of action I saw. The Super Bowl is not only the greatest single game of the NFL season, it's an final moment for legions of football fans to get together one last time a season and celebrate the game they love.

I feel fortunate to be one of the tribe who got together, chanted their chants and paid tribute to the football Gods one final time in the 2011-12 season. With one Super Bowl under my belt, I now have my sights set on the Big Easy and the Super Bowl next year. What do you say, Randy?