Although spring may be a few months away, many are beginning to prepare and make their plans for this year's Relay for Life, which takes place at DePauw University. The American Cancer Society along with Relay for Life held a kick off breakfast on Tuesday morning to not only begin signing up for this year's event but to also inform the community about several changes as well as new committee members that have been added to this year's event, which will take place on April 21. Mayor Sue Murray was in attendance to speak on how important this event is to the community. Putnam County co-chairman, Dick Shuck, was presented with an award from Putnam County Relay for Life representative, Rachel Romas, for being one of the top 10 fundraising Relay for Life event in the nation.
Order this photo

Spring is right around the corner and Relay for Life is beginning to gear up for its annual event. The organization held its first event, a kick off breakfast on Tuesday morning to begin signing up teams as well as fundraising.

The kick off event began with the DePauw representatives Danielle Boyd and Katherine Butler announcing of this year's theme for the relay, holidays.

"You can make any type of holiday your own fundraiser," explained Boyd. "All activities (that evening) will surround different holidays."

Relay for Life is an overnight community gathering, which began in May of 1985, where everyone is provided with an opportunity to fight cancer and help save lives. The event began in Tacoma, Wash. And is now taking place worldwide in more than 5,000 communities and 20 countries. The event raises nearly $500 million a year.

"Because cancer never sleeps, each team is asked to have a representative on the track at all times during the overnight event and to raise a minimum of $100 each," reads a statement from the American Cancer Society. "Each lap around a track at an American Cancer Society Relay for Life event is more than a step forward in the fight against cancer. It's a firm footing we need to navigate the path to a world with less cancer and more birthdays."

Rachel Romas, the community representative for the Putnam County Relay for Life, also presented co-chairman for Putnam County Dick Shuck with an award for being one of the top relays in the nation.

Romas also went over the new team captain kit that was passed out following the event. The kit contains any information a team could need for signing up and fundraising.

The goal for the event is to raise $147,500. The committee, which consists of 40 people, is hoping to recruit more serious teams with bigger fundraising goals.

"Last year we had 30 teams that did not even raise $100," said Romas. "We really want good fundraisers this year."

Several other committee members presented materials not only on fundraising but efforts and activities to help bring the community and students together.

"We are working really hard to have events going throughout the whole event," said Brandon Fisher. "We want to make sure people stay the full 24 hours. 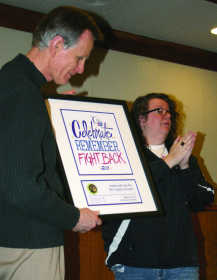 The committee members stressed the importance of getting teams signed up as soon as possible to begin fundraising. Teams typically consist of about 15 members, but all sizes are welcome. All members are welcome to attend the actual relay but do not have to. However, teams are advised to have enough members to walk the track at all times.

Mayor Sue Murray encouraged people to sign up and continue participating in the event for many years to come.

"We are seventh in the nation," said Murray. "This event has made us realize that we share more than what divides us."

Murray also discussed the reasons she keeps coming back and participating in relay as her father and mother have both been stricken by illness and cancer throughout her life.

"Cancer is something that many of us face," explained Murray. "It does not have to define us."

Relay for Life is also looking for sponsorships for the event. Depending on the amount of donation, the business will have its name on a T-shirt, sign as well as mentioned in the opening and closing ceremonies.

The first team captain meeting will take place on Wednesday, Feb. 29 in the UB Ballroom at DePauw beginning at 7 p.m. For more information on the event email relayforlife@depauw.edu. To sign up a team visit www.relayforlife.org.