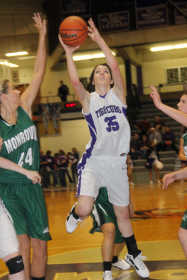 The Tiger Cubs kept the home side at bay for much of the contest but held off a late surge from the Patriots to take home a 48-42 win, their first sectional win since the 2009 sectionals.

Both squads, who hadn't met since 2007, started off slowly but picked up the scoring late in the quarter, with Greencastle scoring the last four points of the frame to take a 12-7 lead into the second period.

The Tiger Cubs opened the quarter with a three and lay-up from Alex Basile but saw Owen Valley reduce the seven point lead to two on the back of three straight baskets from center Megan Eldridge.

The hosts would get as close as two three times before Greencastle closed the half on an 8-0 run to take a 27-17 lead into the break.

Owen Valley cut the deficit in half to start the third quarter but Greencastle responded by scoring the next six points to create an 11 point lead that became nine at the end of the quarter.

The hosts, desperate to make inroads, began to heave up shots and connected with enough frequency to begin to cut into the Tiger Cub lead.

The Patriots would get as close as four points at 43-39 but a five point run from Taylor Pruitt helped ease Greencastle into the semi-final of the Owen Valley sectional.

Greencastle head coach Brad Key was ecstatic afterwards with the effort the squad put in during the game.

"You have to give credit to the defense. Owen Valley's Alisha Wilson is averaging around 14 points a game and she ended up with 10, with a bunch in the fourth," Key said.

"But we did an outstanding defensive job on her. Hannah Wainman shut her down for three quarters. In the fourth, she got loose a couple of times, but that's what good players do."

"We wanted to make someone else beat us. They got a lot of shots at it but we rebounded the ball well and I'm impressed with the level of our effort."

"We just work hard the whole game. It's not always pretty but it works," Key added.

The offense was balanced as seven players scored for the Tiger Cubs, something Key said that they emphasize before games.

"We always say someone else has to come to the show. We have two senior leaders in Hannah and Taylor (Pruitt) but today, we were able to rotate in eight players and not have a drop off," Key said.

"I thought Jessica Lenihan, as a freshman, came in and played outstanding, especially rebounding the ball. Alex Basile came through with 10 points and a huge basket late in the game."

Next for Greencastle is Class 3A No. 10 Edgewood, a team that the Tiger Cubs have already lost to this season and the squad that has knocked the team out of the last two sectionals.

Key said that the girls were ready for the challenge.

"They have five great starters and three or four more that come off the bench that would start for a lot of teams. There's a reason why they've been ranked most of the year.

"But we're excited for the opportunity to play them and that's what we signed up to do. I'd have it no other way," Key added.

"No matter what happens on Friday, Edgewood's going to know they played a ballgame."

IHSAA Class 3A Sectional No. 28

Next game -- Greencastle will face Edgewood in the semi-final of the Owen Valley sectional Friday at 7:30 p.m.