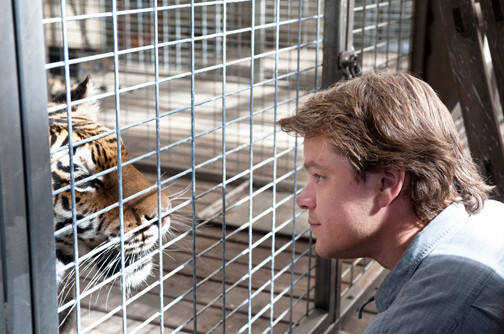 Matt Damon gets up close and personal with one of his new four-legged neighbors, in the 20th Century Fox release "We Bought a Zoo."

Growing up, family dramas didn't have their desired affect on me. I've always watched all types of films, but when it came to family dramas, I found myself in the middle.

There were a few that reached their mark though. I mean who hasn't watched "Kramer vs. Kramer" and not hated Meryl Streep? I still hold a grudge until this day.

Now that I'm older and have two young daughters, I must admit, I'm a sucker for the genre. If a movie has a family in peril with a cute kid that throws some heart-tugging looks, I'm all in.

So when I saw the previews for "We Bought a Zoo", I knew I would be a fan. I was even more excited when I noticed it would be written and directed by Cameron Crowe. The writer/director likes to spread his films out and this ishis first feature since 2005's "Elizabethtown".

The wait was well worth it.

"We Bought a Zoo" is loosely based on Benjamin Mee's memoir of the same name. In the film version, Mee (Matt Damon) quits his job months after his wife's passing and shortly after his teenage son Dylan (Colin Ford) is expelled, intent on a fresh start.

Benjamin sets out with his young daughter Rosie (Maggie Elizabeth Jones) to find the perfect place to start over. After looking at numerous houses, Benjamin settles on a two-story home that comes with its own zoo.

Along with zookeeper Kelly (Scarlett Johansson) and the rest of the staff, Benjamin becomes intent on reopening the zoo and starting the next stage of his life against the wishes of his big brother Duncan (Thomas Haden Church).

As the misfit group races to get the Rosemoor Animal Park in order by the reopening day, Benjamin has other issues his must attend to. As work on the zoo progresses, Benjamin struggles to fully leave his past behind him, protect his daughter from loss and build a future with his son.

When Dylan lets Kelly's cousin Lilly (Elle Fanning) slip through his fingers, and seeks advice from his father, Benjamin offers the advice that driven him throughout his life.

"Sometimes all you need is 20 seconds of insane courage. Just literally 20 seconds of just embarrassing bravery. And I promise you; something great will come of it.

As with every Crowe film, the film has a syrupy-sweet ending, but you feel for the lead character so much, you won't mind a bit.

Damon has received much praise for his portrayal of Benjamin and deservingly so. His strong performance anchors a film that fights though its flaws. Jones is another delight. The youngster more than holds her own against her adult counterparts.

Fanning is another talent that should be taken seriously. Her older sister, Dakota, might be a more familiar name, but her talent equals that of her sibling. Actors would pay a fortune to be able to achieve the genuine casualness Fanning pulls off, while making it look effortless.

My favorite character in the film, with the exception of the animals, is Angus MacFadyen's Peter MacCready. MacCready is the resident carpenter and handyman at the zoo whose hatred of zoo inspector Walter Ferris (John Michael Higgins) injects some great comedic moments into the film.

The DVD offers the behind-the-scenes featurette "We Shot a Zoo" and an audio commentary with Crowe, actor J.B. Smoove and editor Mark Livolsi. My favorite feature of the DVD is the optional "English Friendly Audio Track" that is suitable for viewers of any age.

The Blu-ray of the film is packed with many more extra goodies, so if that's your thing, pony up the extra bucks and pick it up. Viewers also get a digital copy of the film with the Blu-ray.

Final Cut: "Zoo" is a film about coming to terms, letting go and navigating the feelings of loss. Damon is top-notch in the lead role and his talented co-stars bring a story to life that will inspire everyone to find their own "20-seconds of insane courage".

We Bought a Zoo

MPAA Rating: PG for language and some thematic elements