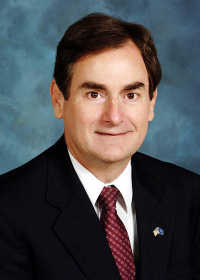 Richard Mourdock, Republican candidate for the United States Senate, will be the featured speaker at the Greencastle Defenders of Liberty Tea Party meeting on Monday, June 11.

The meeting begins at 6:30 p.m. at the Dixie Chopper Conference Center at the Putnam County Airport, 102 Ballard Lane. It is free and open to all interested persons.

Mourdock, currently the Indiana state treasurer, ran against and beat longtime incumbent Sen. Richard Lugar by a 21-point margin in the May 8 Republican primary election.

In the November general election, Republican Mourdock will run against Democrat Joe Donnelly.

All area residents are invited to attend this and all monthly meetings.