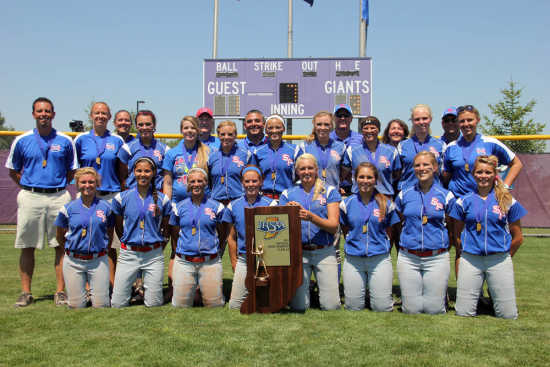 INDIANAPOLIS -- Undefeated season. Fifty-six straight wins. Undefeated at home for four seasons. A four-year record of 102-4. Those are just some of the things you can say about the South Putnam softball team.

South Putnam defeated Adams Central 3-1 Saturday to win its second consecutive IHSAA Class 2A state title, capping a 31-0 season. The Eagles become the only team in Class 2A history to record a perfect season. They are also just the third team to win back-to-back titles in any class.

"It's incredible -- absolutely incredible, absolutely amazing," head coach Chris Jones said. "What these girls have accomplished, not only this season but in their careers, is amazing. I'm not sure you're going to see a group come through South Putnam, Putnam County -- Indiana for that matter -- that can accomplish what they did.

"One-hundred-two and four in a four-year career. Fifty-six straight wins. It's unbelievable and it's just a testament to those girls. Their focus, their heart and how much they love to play the game of softball and how much they of a family these girls really are," he added.

Adams Central entered the contest as the underdog, but quickly proved it could hold its own against the powerhouse No. 1 ranked South Putnam Eagles. Jones said the team knew Adams Central would come ready to play and his team had prepared all season for the chance to capture title No. 2.

"We talked about it all week long," Jones said. "They're (Adams Central) feisty, they're aggressive and they're going to put the ball in play. They are a state championship quality team. You make the state finals, you're good. That's the way it is. They put the ball in play and their defense is solid. We just had to make the plays when we had the opportunity and get big hits and we did.

"The nice part is our schedule has helped us to go through some adversity to play some good quality opponents. You know I can honestly say it right now, I believe these girls are the best team, regardless of class, in the state of Indiana."

South Putnam got things going in the bottom of the first inning after Jenny Thompson crushed a double for the Eagles' first hit of the game. Two batters later Brooke Boetjer hit a double to score Thompson and give South Putnam an early 1-0 lead.

Adams Central knotted the game at 1-all in the top of the third inning when Jenae Blackburn hit a bloop single to score Alexa Baller. Boetjer stuck out Alyssa Keller to close out the top half of the inning.

As they have all season long, the Eagles responded in the bottom half of the third inning when Kelsey Whitaker drove in Thompson to take a 2-1 lead. Thompson got on base by hitting her second double of the game, which is a Class 2A State Final record.

The Eagles are known for their high-powered offense, but during Saturday's game they proved their defense was just as impressive. The Jets' Sammie Baker opened the fourth inning with a laser shot to right field that looked to be a sure base hit. However right fielder MaKenzie Trisler closed on the ball and made an amazing scooping catch just before the ball landed.

South Putnam held to its slim 2-1 lead going into the sixth inning. Jenna Jones started the inning off with a double. Jones moved to third when Mattie Varvel reached on an error. Trisler was able to reach base when Baker couldn't get control of the ball at second, scoring Jones from third.

With Varvel at third and Trisler at first and no outs, South Putnam looked poised to put together a big inning. But Janet Crafton's line drive was plucked from the air by Jets shortstop Olivia Macklin for the first out. She then tossed the ball to third before Varvel could get back to complete the double play. Brooke Cundiff grounded out to end the inning for the Eagles.

With a 3-1 lead entering the seventh inning, Emily Dabkowski posted the first out, but a walk by Madi Schwartz and a hit by Baller caused for a few tense moments. But Boetjer buckled down and stuck out the final two batters to seal the win for South Putnam.

The team formed a pile between the mound and home plate and the celebration was just getting started. After receiving their state championship trophy and medals and taking the official team photo, the Eagles moved to an adjoining practice field to continue their celebration.

The players and coaches mingled with a large crowd of South Putnam fans as pictures, stories and laughs were shared. The large Indiana-shaped Class 2A title trophy made its rounds for pictures and once Jones handed it off, he reflected on what his four seniors have meant to the team.

"That is a special group," he said. "You start with Kaylin (Yon) who is undefeated in her career pitching. She's always ready as our No. 2 if we have any issues with Brooke and need her to go in. She's the leader in the dugout when she's not out there on the field and just an all-around great person.

"You start talking about Jenny Thompson. Holy cow, did she come up big today. She's called pitches for the last four years. Her and Brooke are almost one in the same in the way they think and the way they work. She's been huge for us. She's a great person as well," Jones said.

The South Putnam skipper noted the trials that Dabkowski had to endure during her final season and how well she's performed.

"Emily Dabkowski is second team All-State as a shortstop," Jones said. "The adversity she fought through with injuries throughout her senior season, not only in softball, but fighting through the back thing. She has been tremendous."

Jones noted that she might have the chance to play in the All-Star game on June 23. Dabkowski is an alternate, but a rumored injury to the first team All-State shortstop could give Dabkowski the start.

The coach then turned his attention to his starting pitcher.

"You talk about Brooke Boetjer and what can't you say about Brooke? Indiana Gatorade Player of the Year, opportunity to be Miss Softball, first team All-State, playing in the All-Star game at Carmel. Brooke's just amazing out there," he said. "She's ruthless, she's tough, she's just mentally ready every single pitch and she trusts her defense and sometimes that's tough for a pitcher to do."

Saturday's state championship isn't the end of the road for Jones either. Jones has been named the District 3 Coach of the Year, thus giving him the chance to coach the South squad in the All-Star game.

During the All-Star game festivities, two major honors will be announced and a person would have to think both Boetjer and Jones are in heavy consideration.

"That's when they'll announce Miss Softball and the Indiana Coach of the Year, so it's just an awesome feat for our community, for our school and our girls," Jones said.

Before concluding his interview and rejoining the celebration, Jones focused again on his seniors and what makes his team so special.

"Not only are those girls great softball players, they're great young women, they have class, they have tremendous respect for other people and they brought us together as a family and we are a true family. South Putnam softball is not just a team, we are a family and you can see that on and off the field," Jones said.