'Chronicle' is not your typical superhero flick 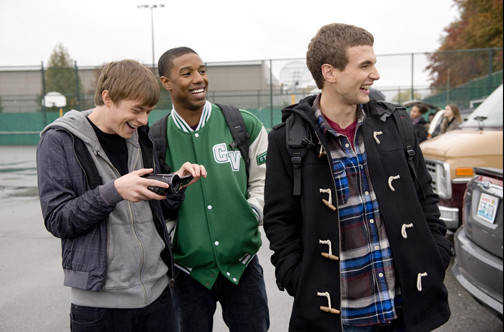 There's perhaps no screenwriter in Hollywood currently as hot as Max Landis. Landis has multiple projects in the works, but his debut feature film, "Chronicle" hit DVD shelves recently and proved he's going to be a significant voice in the Hollywood scene for many years to come.

"Chronicle" is a found footage flick, and before you cringe, this is one that gets it right. Instead of relying on the footage itself to do the talking, "Chronicle" is all about character, and the arc of the characters is awesome.

Andrew (Dane DeHaan) has a turbulent home life with an alcoholic ex-firefighter father and a dying mother. His father abuses him so he turns to putting everything on video. At a rave, his cousin Matt (Alex Russell) and new friend Steve (Michael B. Jordan) stumble upon a mysterious object underground that gives the trio telekinetic powers.

As the film progresses, Andrew's use of his power becomes darker, resulting in the separation of the trio. As one meets an untimely fate, the final two face off in an epic showdown that is truly good versus evil.

The film has been billed as a superhero movie, but it's so much more. These aren't kids who get a new ability and instantly want to save the world and make it a better place. They are content with performing small "tricks" such as stopping a baseball in midair and manipulating vehicles and just having fun with it.

The manipulation of vehicles also mirrors the character arc of Andrew. It may not make sense now, but if you think about it after the flick, you'll see what I'm talking about. I don't know if that was a conscious choice, but it works very well.

Josh Trank directs the film and does a great job in his feature film debut. Making films is all about choices and Trank nails it at every turn. The film is told from the point of view of Andrew's camera, which he uses his newly acquired telekinetic powers to float around scenes. I don't know if it was Landis or Trank who made that call, but it was one that worked brilliantly.

I particularly loved how the film uses video from mobile devices of the crowds as part of the footage.

Trank is reportedly developing franchise flicks such as "Venom" and a reboot of the "Fantastic Four". He's also attached to direct "Red Star" and "Shadow of the Colossus".

As far as Landis, this guy is the real deal. He's a highly sought after young talent who is already showing his range. He's penned a reimagining of "Frankenstein", "Amnesty", which is to be directed by Ron Howard and was tapped to write "Pied Piper" for Fox.

While I loved the movie, I found myself disappointed with the extras.

The Blu-ray/DVD combo pack features the theatrical version of the film as well as a director's cut. I really didn't see too much difference between to the two, to be honest.

As far as extras, you get a deleted scene, a pre-visualization reel and a camera test featurette. I can deal with not having a lot of extra goodies to offer, but my biggest gripe was the lack of a commentary track.

Final Cut: "Chronicle" is one of my favorite movies of the year and Landis and Trank will soon become household names. It's a fresh take on the found footage film and is entertaining as hell.