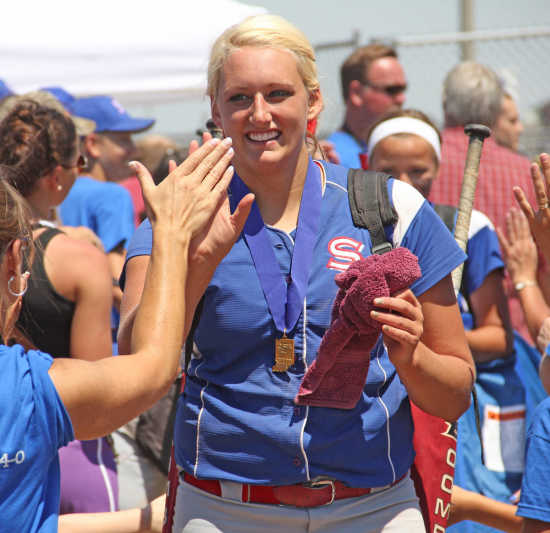 South Putnam's Brooke Boetjer has been named the Banner Graphic Player of the Year for the fourth straight season.

Keeping with the theme, Boetjer becomes the first player to win the Banner Graphic Putnam County Player of the Year four straight years and the Eagles are the first nine-member starting team to be named to the All-County squad in its entirety.

Boetjer put together an impressive senior season to help her South Putnam Eagles team to a perfect 31-0 record and its second state title in as many years.

In her senior campaign, Boetjed was second on the team in batting average with a .547 average and led the team with 41 RBI and tied for the lead with five home runs. She was third on the team in hits with 47, added eight doubles and 26 runs scored.

On the mound, Boetjer put up some mind-boggling numbers. The senior was 22-0 with 168 strikeouts and an ERA of .15. In her four-year career, Boetjer had a record of 72 wins, four losses, two saves and an ERA of .39. Boetjer was also first team All-State.

Dabkowski proved to be a leader off and on the field for the Eagles in 2012. The senior led the team with a batting average of .560, in hits with 51, in doubles with 15 and in triples with six. She also had 15 stolen bases and 42 runs scored to lead the team.

Dabkowski displayed some power as well as she chipped in three home runs in 2012. She was a second team All-State selection.

Thompson was the third member of South Putnam to post a batting average over .500, finishing the season at .522. She was second on the team with 13 doubles, but set a new mark for the Class 2A Championship game by smacking two in the Eagles' 3-1 win over Adams Central.

Jones tied for the team-lead on South Putnam with five home runs, while batting .395. She also had 30 hits, with 10 doubles, 19 RBI and 26 runs scored. Of the team's starters, Jones recorded the lowest amount of strikeouts for the Eagles' with six.

Trisler batted .316 for South Putnam with 23 runs scored and 17 RBI. She contributed two doubles, three triples and four stolen bases. Trisler produced an amazing diving catch in the state championship game to save runs from scoring.

Junior Varvel batting a solid .411, collecting two home runs, three triples and two doubles along the way. She had 30 hits, with 20 runs scored and 21 RBI. She contributed one stolen base on the season.

Crafton served as the Eagles' centerfielder and offered up some good numbers in 2012. The junior batted .390 with 30 hits and 28 runs scored. She had two home runs, seven doubles and 17 RBI. She stole two bases in 2012.

Cundiff recorded 15 RBI on 22 hits and had 25 runs scored. She batted .344, while collecting two doubles and one triple Cundiff came up big in the sectional championship at her second base position, recording multiple tough outs during the contest.

Left fielder Whitaker batted .304 for the Eagles' and posted 11 RBI in the process. She had three doubles on 21 hits and had 24 runs scored. She also recorded two stolen bases. It was Whitaker who drove in Thompson in the state title game to provide what would turn out to be the winning run.

Gutierrez was a double threat for Cloverdale this season. The senior batted .386 with tied for the team-lead with 24 RBI. She led the team with four home runs and had one triple and seven doubles.

On the mound, Gutierrez recorded 211 strikeouts, while giving up 44 walks. She gave up 31 earned runs for a paltry 1.51 ERA.

Knapp was another big bat for Cloverdale in 2012, with a batting average of .422. She also led the team with 16 doubles and tied for the team-lead with Gutierrez with 14 RBI. She collected three triples and three home runs.

Pruitt batted .328 while knocking eight RBI in during the 2012 season. She had 22 hits, with five doubles and two triples. She also had 17 runs scored and stole 10 bases for GHS. Of three GHS batted who posted an average of .300 or better, Pruitt posted the fewest strikeouts with eight.

Surber has the distinction of being the only freshman to make the 2012 All-County team. Surber was second on the team in batting average with .328, while collecting 19 hits. She tied for the team-lead with 11 RBI and had two home runs, two doubles and two runs scored. In 58 batting attempts, she posted a team-low in strikeouts with five. She also led the team in OBP, SLG and OPS percentages.

Surber was the Cougars' top pitcher, but no stats were available at press time.