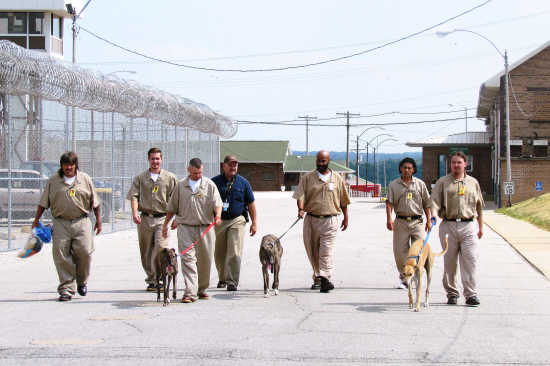 It's one last walk for the first class of greyhounds and handlers at the Putnamville Correctional Facility. The first graduates of the Prison Greyhound Program -- Dillinger, Gordy and Rosie -- have been given to permanent homes, while a new class of four dogs has arrived at PCF.

One cloudy day in March, Jeff and Mary Louden and Mike and Teresa Hatton delivered the first three greyhounds to Putnamville and three months later, offenders and dogs were being recognized as the first graduates of the Prison Greyhound Program.

During the last meeting with the original greyhounds, volunteers, Mike and Teresa Hatton and program directors Jeff and Mary Louden recognized the inmate handlers with certificates for being the first graduates of the program.

"You could see the excitement and feeling of accomplishment on their faces as they received their certificates," commented Ed Joslyn, who coordinates the program with Steve Shotwell.

"But as the meeting ended and the realization that the dogs were leaving sunk in, their demeanor changed," he noted. "They became even more affectionate with and protective of their dogs."

Now, one hot and sunny day in June, the volunteers were back to transport Rosie, Gordy and Dillinger to their forever homes and to new owners who anxiously awaited their arrival.

"We were able to place them with caring animal lovers, some of whom already own greyhounds," Prison Greyhound President Mary Louden said.

Teary-eyed, the six handlers lavished the dogs with hug and kisses as they said goodbye and handed their leashes over for the last time. It was a bittersweet moment for the handlers.

"He's my best friend in this place," offender Fitch said.

Hartzell told the volunteers, "It's going to be really hard when I get back to the dorm and see their empty crates."

"All three of them (the greyhounds) will hold a special place in my heart, cause they were the first ones," Johnson commented.

Correctional officer Paula Burns, one of the officers assigned to the housing unit where the greyhounds lived with their handlers, noticed a change in the offenders.

"The whole atmosphere in the dorm has changed," Burns said. "The guys really miss them. One of the handlers even cried when he got back to the dorm."

The program is structured to socialize and acclimate the greyhounds to life outside a racetrack. Greyhound volunteers provide instruction to offender handlers regarding the care and feeding, anatomy and veterinary information and history of the breed.

"Interaction between the dogs and offenders has been a very positive experience and the transition has been seamless," PCF Superintendent Stanley Knight reported. "We were able to expand the program and afford additional offenders the opportunity to participate. Offenders involved in programs are generally less likely to have behavioral issues because they don't want to risk being kicked out."

The expansion has PCF staff and offenders excited. Four new greyhounds arrived from Daytona, Fla., over the weekend and have partnered with graduates and the new handlers.

Jerry Hefley, Garth Holston and Richard Knox from Indianapolis and John Dickerson of Terre Haute will begin the orientation process along with five-year-old Onyx, three-year-old Midnight and Basil, and two-year-old Hunter. 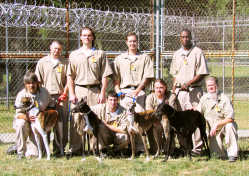 Prison Greyhounds is a non-profit organization.