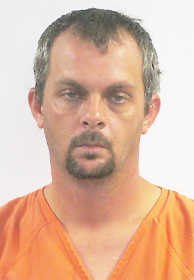 A 38-year-old former Greencastle man who managed to elude capture for three months in an armed robbery case, has been tripped up by an ill-advised shoplifting scam at a Florida Walmart store.

Timothy V. Giles, wanted in connection with a March 31 armed robbery at The Pawn Store, 22 E. Washington St., was arrested by police in Ormond Beach, Fla., earlier this week in a shoplifting incident.

Giles reportedly had picked up shorts and other clothing in the men's department and attempted to return them for cash or a gift card at the store's customer service counter without ever paying for the items.

After taking him into custody, Florida police ran a routine check on Giles and discovered he was wanted on a Putnam County warrant for the Greencastle armed robbery.

"We've been working in conjunction with the U.S. Marshal's Service trying to locate him on our warrant," Greencastle City Police Det. Randy Seipel told the Banner Graphic Friday.

GPD officials were aware that Giles had lived in Florida prior to coming up to Greencastle and believed he had returned to the area near Daytona after allegedly committing The Pawn Store robbery.

The suspect was extradited from Florida Tuesday and lodged in the Putnam County Jail before appearing in Putnam Superior Court Friday for an initial hearing.

Giles is charged with armed robbery, a Class B felony, and theft, a Class D felony, in the pawnshop incident that unfolded at approximately 10:23 a.m. March 31.

The suspect reportedly ordered the clerk, the only employee in the store at the time, to the ground and made him crawl into the storeroom. The suspect then ran out the back door and took off east, escaping detection in the middle of a spring Saturday morning.

He made off with a "substantial sum" of cash in a metal cash box, Det. Seipel said.

"We canvassed the area but found nothing," the veteran GPD detective said, adding that nobody reported seeing anything strange in the area.

Giles was identified off the store's security video, Det. Seipel said, and actually had been in the establishment the day before the robbery to pawn a gold ring.

When he returned March 31, he was caught on video.

"A few minutes before the robbery he walked by the back door and the camera captured him," Seipel said, noting that the suspect actually stopped and looked up toward the camera.

Moments later a person entered the store wearing the same clothing but with his face covered. The clerk noted that it was the same man who had been in the shop the day before, saying that he recognized his voice and eyes.

Dets. Seipel and Michael Collins, both of whom are reportedly familiar with Giles, also identified him from the video as the perpetrator.

Giles pled not guilty Friday in Putnam Superior Court. He was ordered held without bond in a prior case (failure to appear on a misdemeanor count) and $30,000 cash bond in the armed robbery case.

Giles, whose address is now listed as homeless, was returned to the Putnam County Jail. No trial date was set.