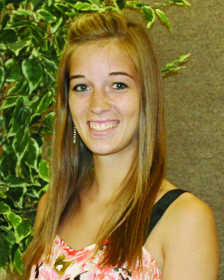 Tari Straziscar is an 18-year-old from Roachdale. She is the daughter of Sean and Kristy Straziscar and older sister of Tatum, 17, and Trae, 14.

Straziscar is a 2012 graduate of North Putnam High School, where she participated in FFA, National Honor Society, softball, volleyball, SADD and FCA. She served as 2012 FFA chapter president and as a Cougar Kickoff Mentor.

She is also a member of Working Farmers 4-H Club and the Putnam County Youth Philanthropy Committee.

Her hobbies include playing softball and volleyball, decorating cakes, coaching youth volleyball, writing, being outdoors and listening to a wide variety of music.

This fall, Straziscar plans to attend Purdue University to study food science. After graduation, she aims to work for a major food company in the product development department.

Straziscar said she entered the queen contest to gain a new experience by stepping out of her comfort zone. She has never done anything like this before but thought it could be fun. She also thought this would be "a great way to serve and represent Putnam County."

She describes herself as a quick learner who adapts well to all situations. She is also outgoing and adventurous when it comes to meeting new people and trying new things.

The best advice she would give a younger person is to never give up.

"Keep your eyes on the goals you have in front of you," Straziscar said. "Anything is possible. You must never listen to those telling you that what you want isn't possible because your belief in yourself will determine if you can."

When Tari was 14, her mom got sick and was in and out of the hospital for three months. She said the event taught her hard work, compassion and maturity, as she had to take on more responsibility in caring for the house and her siblings.

Straziscar most admires her Grandma Mar for her perseverance in fighting breast cancer off and on for 40 years, "never quitting and being positive until her last day."