By LISA TRIGG, Special to the Banner Graphic 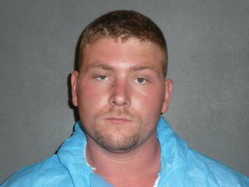 Musall, 28, of Cloverdale, has been charged with two counts of felony murder, and two counts of burglary resulting in bodily injury, rape and kidnapping, all class-A felonies, stemming from the August 2011 homicide of Joseph Snow at Rocky Fork Lake in southeastern Parke County.

"I only remember bits and pieces ... I know I beat him up pretty good," Musall says in a video interview with police a short time after he is arrested on Aug. 13.

The video -- recorded at the Indiana State Police post at Putnamville -- depicts a shirtless Musall talking to police, sometimes at a mumble, after saying he has been "up all night."

He tells ISP Detective Deanna Jones and Putnam County Sheriff's Detective Pat McFadden that he remembers hitting Snow with his fists in the face numerous times, and binding Snow with duct tape because the injured man tried to escape the mobile home. Musall also told police in the video that he had consensual sex with his ex-girlfriend, who at the time was residing with Snow at the mobile home. And, that he wrapped a vacuum cleaner cord around the throat of Snow. But he denied threatening his ex-girlfriend's toddler daughter with a knife.

"If I did, I don't remember," Musall said in the interview, in which he also mentioned several times that he had a history of blacking out and not remembering things.

At one point, Musall is asked if he believes his ex-girlfriend "deserves to be in trouble" for the events that happened at her home, including the death of Snow.

The jury also saw photographs of bloodstains on a pillowcase, mattress, floors and walls during evidence presented Thursday.

Sgt. Kris Fitzgerald of the Indiana State Police explained to the 12-member jury that the blood in the photo was believed to be Snow's blood.

The Indiana State Police at Putnamville became involved in collecting evidence at both the crime scene in Parke County, and at the Putnam County cornfield where Snow's body was recovered after it was taken out of Musall's car.

On Thursday morning, the jury watched a video-recorded interview with Detective McFadden talking to Snow's girlfriend, who was also the ex-girlfriend of Musall. The woman reviewed events that occurred on Aug. 12 in which she claimed Musall sent threatening text messages to her phone during the day, and then came uninvited to the Parke County mobile home that she shared with Snow. The woman told McFadden that she awoke in the middle of the night to find Musall in her bedroom beating Snow.

After Musall allegedly put Snow's lifeless body into the back of his car the next morning, and took the woman's 20-month-old child to guarantee that she would follow him in her own car, the woman drove into Putnam County while contacting police on a cell phone she had hidden inside her clothes.

The video-recorded interview ended soon after McFadden was able to notify the woman that her child had been recovered unharmed, and that Musall was located and arrested in Cloverdale in southern Putnam County.

Also Thursday morning, the jury heard the testimony of a registered nurse who cared for the ex-girlfrield allegedly raped by Musall.

Jenni Pohlar reviewed records she made on the day she saw the victim at Putnam County Hospital, stating that the victim presented information that she was assaulted and raped in her Parke County home during the overnight attack in which her live-in boyfriend was killed.

The trial began Monday in Parke Circuit Court and was expected to continue through Friday. However, Judge Sam Swaim notified the jury Thursday afternoon that the trial may extend into Tuesday of next week. The prosecution still has four witnesses left on its list to testify, while the defense team has not yet had an opportunity to present its case or call witnesses.

Lisa Trigg is a reporter for the Tribune-Star newspaper in Terre Haute.