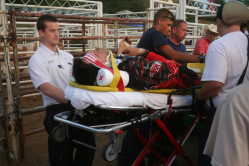 Bullfighter Jordan Hamson was rushed to Putnam County Hospital on Saturday night after sustaining injuries during the rodeo. He was cleared and released later that evening.

A scary scene developed at the fair rodeo on Saturday night as a bullfighter was rushed to the hospital after being kicked following the second bull ride of the night.

Jordan Hamson, 22, was injured while trying to keep the bull rider safe.

He was released from the hospital shortly after the rodeo ended and cleared to resume all activities.

After being stomped, Hamson was pulled to safety. Paramedics quickly arrived to place him on a stretcher and checked his vitals.

Hamson was taken by ambulance to Putnam County Hospital where he was given at CT scan and examined for internal injuries.

The pair has worked together for about five years, Wade said.

Rodeo workers picked Hamson up from the hospital on their way out of town.

The rodeo was presented by Rodeo H, but the bull riders and bullfighters are from C-Bar Rodeo.

C-Bar will have its next show Wednesday night in Paris, Ill. Hamson is expected to participate.