New amenities inside and out for Greencastle McDonald's

Over the past seven weeks, the Greencastle McDonald's restaurant has been undergoing a huge transformation, inside and out, all around the building and the parking lot.

Change was definitely on the menu at 940 Indianapolis Rd., and McDonald's owner Bob Jedele and Region Manager Bobby Hopper hope customer and community patience will be rewarded when they experience: 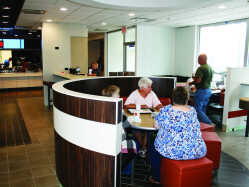 The remodeled and expanded interior of the Greencastle McDonald's features varied and more comfortable spots to eat, along with a seating capacity that has expanded to 120.

-- Additional seating, taking the capacity from 73 (which had been reduced to 45 during construction) to around 120.

-- Expanded square footage with the front of the building pushed out 30 feet toward Indianapolis Road, increasing space in the 12-year-old building by a third.

-- An additional 15 parking spaces emerging once all the dust is gone and construction vehicles and equipment have disappeared.

-- Expanded areas created for the kitchen, the crew room, computer/technology area, storage and refrigeration and freezer.

"The only areas that didn't get moved or touched were the ice machine in the back and the fry station," Jedele said.

Even the restrooms were remodeled and expanded after the kitchen area was relocated.

"We now have a regulation McDonald's kitchen," Jedele noted.

"The old store was designed to do half the volume this store is doing," he said. "So the original kitchen here was the last McDonald's kitchen in a series of low-volume buildings put in right after our relocation (from across the street from Kroger).

Jedele Enterprises Inc., which owns the Greencastle McDonald's (along with stores in Cloverdale, Mooresville, Brazil and two in Crawfordsville), reopened the newly remodeled interior layout and decor to customers on Friday, and early reviews have been encouraging.

"I've had a couple of comments that it 'feels comfortable,'" region manager Hopper said as the breakfast rush settled into the pre-lunch lull.

"They say they love the atmosphere now, which is very open (in the layout), where before they said it felt kind of strangling."

Hopper also pointed to more comfortable seating, with a number of padded chairs and bench seats, along with ample barstool seating. 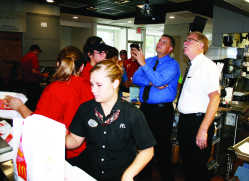 Owner Jedele, enduring his second major McDonald's renovation in Putnam County within the calendar year after rebuilding his Cloverdale store from the ground up, is equally pleased at the public reception.

"It's quieter now," Jedele said of the new interior that even features some contour seating and several room dividers.

Two big-screen televisions will be added in the dining room with a third in the meeting room area.

"Now you can actually find a quiet spot so you don't have to raise your voice to have a conversation," Jedele added with a smile.

One of first things customers will see inside is a new, larger menu board and a dual-point service counter. After an order is taken, a customer receives a receipt with a number on it that corresponds to the number on an overhead monitor.

Other McDonald's employees, working behind the front counter personnel, fill those orders and then hand trays with complete food and drink orders to the customer whose number is called.

"In our tests, guests have said it is a lot less stress on them when the order number is called and they don't have to worry, 'Is that my order or not' when a tray is presented. Before we'd holler 'No. 1 with a Diet Coke,' and a customer would step up and ask, 'Is this my order?' when sometimes half of our orders can be a No. 1 with Diet Coke."

The reconstruction project began May 29, Jedele noted, with plans for all work inside and out to be finished by Aug. 3.

That allows two weeks to work out any kinks before a scheduled Aug. 18 grand opening.

"We want to make sure everything is all polished and looking as good as we can," the owner noted.

To assure that timetable works, McDonald's will be closing early (at 9 p.m.) for the next two weeks to enable remaining work to be done.

The Aug. 18 grand-opening event will feature a visit by Ronald McDonald at 11:30 a.m., with the Indianapolis Colts' "Colts in Motion" interactive experience and displays onsite from 2-4 p.m. and the Rods & Relics car club returning to the McDonald's lot for the day. Balloon artists, face-painting and giveaways are also scheduled.

Meanwhile, the new decor features more earth tones (including a tope-colored exterior, the first in Indiana, Jedele said) and a coffeehouse atmosphere with added electrical outlets to make it user-friendly for the computer crowd.

"The reality," Hopper noted, "is that we didn't have to do any of this. But Bob (owner Jedele) feels the Greencastle community has been so faithful in its support and so good to us that he wants to enhance the customer experience for them."

McDonald's has continued hiring throughout the remodeling period, adding nine new people in the process with probably another 10-15 to come, Jedele said.

The new, larger facility puts the Greencastle store in position, Hopper said, to be a McDonald's training store.

"We have all the systems, and now we have the space," he said.

"Before we had the new systems but no space."