Local clogger advances to semi-finals on "America's Got Talent" 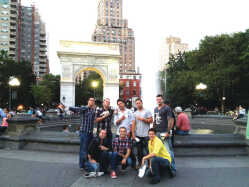 The clogging super group known as All That consists of members from all across the country. The group includes (front, left) Mark Clifford, Harrison Barnes, Drake Elkin, Brad Berry (back, left), Brian Staggs, Joel Harrison, Delohn Collins and Mike Curtis.

One Cunot native is among those in the running to win a $1 million prize and a headlining show on the Las Vegas Strip.

Drake Elkin along with his All That clogging dance group is among those who advanced to the semi-final round of the NBC television show, "America's Got Talent."

Elkin, 27, is the son of Joseph and Stephanie Elkin of Cunot, and is married to Nikkole, 28, the daughter of Daniel and Jennifer Morris of Clay City.

The couple lives in Pigeon Forge, Tenn. However, thanks to the competition, Elkin is taking a break from his day job with the Hatfield & McCoy Dinner Show to dance with his fellow cloggers.

"I got into dancing from my older brother, Steve. He actually started clogging a year before I did," explained Elkin. "At first I wasn't too interested in it. I went to a class and I saw all the girls there and that's actually what made me join."

Elkin began his dancing career at the age of 10 with the Rise and Shine Cloggers, based out of Ellettsville. He continued to advance at lightning speed, joining another competition group five years later, Clogging Sensation, based in Branson, MO.

"I took lessons and danced with the competition team in Ellettesville about five years in the studio I danced at in Ellettesville," said Elkin. "The studio team took a two-week trip to Europe so I figured I'd go all out and give it my best shot in hopes of eventually being able to go."

After leaving Rise and Shine, he competed with the Clogging Sensation several times a year, commuting each time to team practices and competition sites. Elkin was also able to compete in the Junior Olympics in Detroit. He ended up winning five gold medals and six silvers.

"It was within my last years with that competition team that I got a call from one of the guys from All That asking me to come work part-time at the Carolina Opry in Myrtle Beach, S.C. From then on I did some part-time work for them on and off," explained Elkin. "A couple of years later I got a call inviting me to take a trip with them to Hong Kong for a Christmas show for a mall." 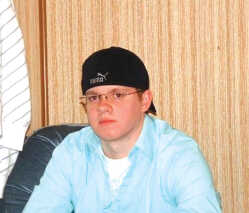 Drake Elkin has been dancing since the age of 10 and currently lives in Tennessee. All That, which was originally voted off the "America's Got Talent" TV show became the first wildcard pick of the sesaon thanks to for judge Sharon Osbourne. The competition will continue this Tuesday evening as the group will compete for a spot in the finale of the show. If they were to win, they would win $1 million along with their own show in Las Vegas.

The group, which is composed of Mike Curtis, Brad Berry, Delohn Collins, Brian Staggs, Joel Harrison, Mark Clifford, Harrison Barnes and Elkin have performed together for more than 14 years.

Once Elkin returned, his wife and he moved to Bloomington, which didn't last long as he got offered to work at the Hatfield and McCoy Dinner Show in Tennessee.

"I've been working there since March 2011," said Elkin. "While I was there I got a call from All That asking me if I'd be interested in doing the "America's Got Talent" show."

It was a whirlwind for Elkin as he traveled to the preliminary tryouts in Charlotte, N.C.

"It was a lot of waiting," said Elkin. "We were very anxious. That entire time we got to dance for maybe a minute and 15 seconds."

The group was soon asked to come back once again for the first taping of the tryouts in Tampa, Fla.

"Once you get to Tampa you're stuck in a holding room all day," Elkin explained. "Nobody really talks to each other, everyone has their game face on. It's over before you know it."

Following the Tampa auditions, the group then traveled to Las Vegas for the next round.

"Vegas was a little bit awkward because they didn't really have a crowd, it was just the judges," Elkin said. "It's absolute silence when you're done. Just blank looks on the judge's faces. All they say is thank you and then they call you back, so it was really awkward."

Just weeks ago the competition took them to New York. The group had gone through several rounds of auditions and lives shows, but ended up being defeated.

However, it was judge Sharon Osbourne who took a chance on the cloggers and chose them on the spot as her wildcard pick.

"We were beat out," said Elkin. "Then right then and there Sharon said she wanted to use her wild card pick on us."

From there the guys had the opportunity to go home and recuperate for a few days. They returned two weeks later for the wildcard round.

The group returned with a brand new action packed routine, which according to Osbourne, was just what she expected.

"They did not disappoint me," Osbourne said. "I love it just as much this time as I have before. That was really well done, thank you."

Osborne seemed to be the only one in support of the group coming back however, as fellow judges Howie Mandel and Howard Stern weren't as supportive.

"It's not that you guys aren't talented. We know you are talented," said Stern. "Sharon was right to bring you back, you deserve to be on a stage somewhere. I thought what you did tonight was beautiful, but it won't be enough to get you through."

The group went on to finish fourth in fan voting and was selected by Stern and Osborne to advance to the semi-finals of the competition during the evening's judges' elimination of the Wildcard Round.

From a young age, Elkin wanted to go places in his career. It's safe to say that being able to show the world how far he has come and being on TV is a monumental step in his journey.

The group has been practicing non-stop to prepare for the next phase of the competition. If the group makes it through the next round they will be one of six groups to move on the finale, three groups have already been confirmed.

"I think they've got a shot at this. I think they're going to the finale ... of course it depends on how America votes," said Elkin's mother Stephanie. "I'm pumped. The result shows are always the hardest to watch. It's like watching the game to the playoffs where the score is tied and there's one play left. It's really been a nail-biter."

Elkin will return with his clogging group All That in Newark, N.J. Tuesday, Sept. 4 at 8 p.m. Due to the Labor Day holiday results will air on Thursday, Sept. 6 at 8 p.m.

The community is invited to vote for Elkin and his group in the two hours immediately following the show. Voting can be done by phone, Facebook and e-mail.