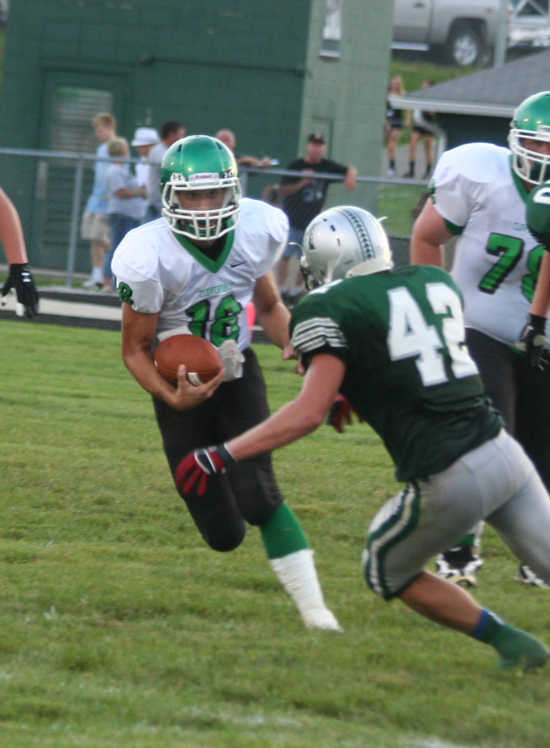 CLAYTON -- An insurmountable deficit ceased to matter for Cloverdale when senior Jourdan Smith was taken off the field on a backboard and loaded into an ambulance with 5:09 left in the fourth quarter.

The Clovers lost to Monrovia, 63-0, but the team rebounded from a disastrous first half that saw the team tally minus 6 yards of offense.

"At halftime, it was a beautiful teaching moment," Cloverdale coach John Butler said, "It was just: stop with the X's and O's. Let's talk about life here for a minute.

"I reminded them one: this is a football game. It's not the end of the world and two: if you learn how to deal with the adversity now and allow football to help you learn those things, then you're going to be a better man for it."

The Clovers spent much of the first half attempting to work in a new option-first offense with senior quarterback Justin Wilson.

"We're still trying to find an identity on offense," Butler said. "We installed the option and gave him (Wilson) one read ... and went with it."

With no time to make the reads, or at times, even receive a snap, Wilson was brought down in the backfield on nine of his 15 carries.

The Cloverdale offense attempted only one pass in the game, and incompletion by Wilson. They had -5 rush yards.

It wasn't just the offense that struggled. The defense only made two stops in first half -- a fumble recovery and a turnover on downs when the Bulldogs lost four yards on a fourth and seven carry by Lane Cooper.

Cooper finished with 47 yards on 12 carries, two touchdowns and a fumble.

The opening score, just 2:22 into the game, was a 49-yard pass from senior quarterback Luke Judson to junior Austin Benjamin.

Wilson injured his ankle early in the second half and was replaced by junior Mark Osmialowski. The offense continued to struggle.

The unit gained only two first downs in the game, with the longest drive being a five-play effort that wound out the clock to end the fourth quarter.

The extent of Smith's injuries aren't known, but Butler said after the game Smith was believed to have suffered a spinal injury.

However, the player was conscious and answering questions.

He had movement in all of his extremities but had little feeling in the lower part of his left leg.

Butler said a game like this, and continuing to play after Smith was injured, will help the players grow as men.

"It's important to teach these kids how to deal with every situation," Butler said. "How to deal with success, if you're having it. Not to get too cocky.

"How to deal with adversity. Because, we all know, life tends to be more adverse than joyous at times."

The Clovers (0-3) will return to action next week, hosting Turkey Run in the team's homecoming game at 7 p.m.

Butler said he intends to keep the team focused and ready to play as the players look for their first win of the season.